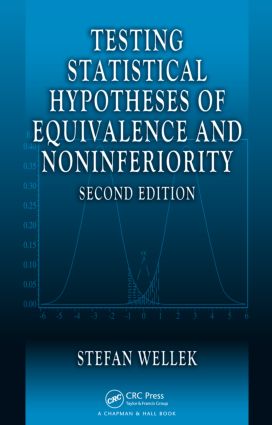 While continuing to focus on methods of testing for two-sided equivalence, Testing Statistical Hypotheses of Equivalence and Noninferiority, Second Edition gives much more attention to noninferiority testing. It covers a spectrum of equivalence testing problems of both types, ranging from a one-sample problem with normally distributed observations of fixed known variance to problems involving several dependent or independent samples and multivariate data. Along with expanding the material on noninferiority problems, this edition includes new chapters on equivalence tests for multivariate data and tests for relevant differences between treatments. A majority of the computer programs offered online are now available not only in SAS or Fortran but also as R scripts or as shared objects that can be called within the R system.

This book provides readers with a rich repertoire of efficient solutions to specific equivalence and noninferiority testing problems frequently encountered in the analysis of real data sets. It first presents general approaches to problems of testing for noninferiority and two-sided equivalence. Each subsequent chapter then focuses on a specific procedure and its practical implementation. The last chapter describes basic theoretical results about tests for relevant differences as well as solutions for some specific settings often arising in practice. Drawing from real-life medical research, the author uses numerous examples throughout to illustrate the methods.

"… the book is clearly written, easy to read and comprehend the various issues related to testing statistical hypotheses of equivalence and non-inferiority. … I strongly feel that one who wants to acquire/use related theoretical as well as application skills or understand/review any research article on equivalence and non-inferiority testing, he/she should try to go through this book."

"This book provides value to applied statisticians far above its stated primary objective. Perhaps the most valuable contribution this book makes to the field of applied statistics is its impressive collection of equivalence testing procedures. … Of all the additions in the current edition, testing for relevant differences stands out as a rational and widely applicable methodology that is underutilized by most applied statisticians. The author provides a very convincing argument for why this methodology is more appropriate than testing for statistically significant differences in the majority of scientific applications. … the book is well written … very important book in the field of statistical hypothesis testing."

"This book will clearly be an extremely valuable practical guide for researchers faced with such problems, and would also provide a good introduction to anyone new to the special challenges of equivalence and noninferiority testing."

"This book provides a comprehensive and up-to-date overview of the topic and hence, I strongly believe, would be a valuable reference work for a library, and for both applied statisticians who need to deal with equivalence problems and researchers in statistics. Although this is not an introductory textbook, a lot of the material could be used in introductory inference courses. Senior and graduate statistical students would also benefit from exposure to the topic of the book."

"The author made a thorough revision by adding new chapters on equivalence tests for multivariate data. … The strength of the book is that it includes numerous worked-out examples to illustrate the suggested methodologies."

"The update is timely and includes some material on new subjects as well as updates of material presented in the original edition. … this book deserves a place on the bookshelf of the library of every pharmaceutical company. … this book remains the standard for texts on equivalence studies. The addition of information on non-inferiority analyses is welcome. A copy of this book should be available to every statistician who works on clinical trials."

"The main value of the book is in its rather comprehensive and explicit treatment of various tests for equivalence problems. The book is very carefully written and mathematically correct … applied (bio-)statisticians may find this book a helpful manual for various testing procedures in the field of equivalence testing. These procedures are very carefully described and are accompanied by SAS of Fortran code. More mathematically oriented readers may regard this book as a good source of examples, and the thorough discussion of relevant practical questions in the field might stimulate them to doing further research in this area."

"… a thorough and wide-ranging exposition of statistical methods for the testing of hypotheses of equivalence … The content of the book and the presentation of the material are praiseworthy for several reasons. Throughout the book, the focus is on optimal tests … . Where exact methods are not available, asymptotically equivalent tests are presented. The small sample behaviour, both size and power, of asymptotic tests is thoroughly studied through simulation. This must have been an enormous amount of work, but the effort certainly was not in vain; one is convinced that one can apply the methods presented with confidence. Even more deserving of praise is the fact that computer programs (mostly in SAS language) implementing various tests and power calculations are provided … In summary, this is an excellent book and strongly recommended. It is required reading for all biostatisticians and developers of statistical software who work in this arena. It will be useful when teaching statistical test theory and in practice. …"

"… this book provides the reader with the opportunity to do equivalence testing for various statistical problems. The author has helpfully provided a collection of computer programs (in SAS and Fortran) that allow for easy implementation of the methods presented … I was left feeling that this book provides a good grounding in statistical techniques to do hypothesis testing in equivalence trials."

"Wellek has done a commendable service to the academic community by providing the first comprehensive treatment of testing hypotheses of equivalence, since most of the work in this area so far is confined to research journals. … Overall, this excellent book has great potential for applications and should interest students and researchers alike. Summing Up: Highly recommended."

"… this book has explained well with examples and case studies the topics … Researchers will find this book thought-provoking."

Statistical meaning of the concepts of equivalence and noninferiority

Demonstration of equivalence as a basic problem of applied statistics

Numerical specification of the limits of equivalence

Standard solution in the case of location parameter families

Relationship between tests for noninferiority and two-sided equivalence tests

The principle of confidence interval inclusion

Construction of asymptotic tests for equivalence

The one-sample problem with normally distributed observations of known variance

Noninferiority analogues of the tests derived in this chapter

Equivalence tests for the McNemar setting

Testing for dispersion equivalence of more than two Gaussian distributions

A nonparametric k-sample test for equivalence

Tests for Establishing Goodness of Fit

The Assessment of Bioequivalence

Methods of testing for average bioequivalence

Bioequivalence assessment as a problem of comparing bivariate distributions

Tests for Relevant Differences between Treatments

Solutions to some special problems of testing for relevant differences