Textbook of Drug Design and Discovery 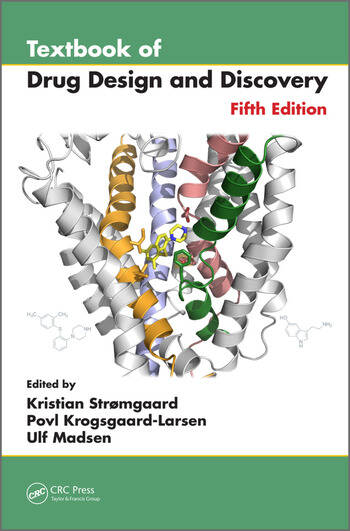 Textbook of Drug Design and Discovery

Building on the success of the previous editions, the Textbook of Drug Design and Discovery, Fifth Edition, has been thoroughly revised and updated to provide a complete source of information on all facets of drug design and discovery for students of chemistry, pharmacy, pharmacology, biochemistry, and medicine. The information is presented in an up-to-date review form with an underlying and fundamental focus on the educational aspects.

Kristian Strømgaard is a professor of chemical biology in the Department of Drug Design and Pharmacology, Faculty of Health and Medical Sciences, at the University of Copenhagen and a director of the Center for Biopharmaceuticals, Copenhagen, Denmark. He received his master’s degree in chemical research from the Department of Chemistry at the University College London under the supervision of Professor C. Robin Ganellin. In 1999, he received his PhD in medicinal chemistry from the Royal Danish School of Pharmacy (now School of Pharmaceutical Sciences). Subsequently, Dr. Strømgaard carried out his postdoctoral studies with Professor Koji Nakanishi in the Department of Chemistry at Columbia University. During this period, his main focus was on medicinal chemistry studies of neuroactive natural products, with a particular emphasis on polyamine toxins and ginkgolides. In 2002, he returned to the Faculty of Pharmaceutical Sciences as an assistant professor and became an associate professor in 2004 and a professor in 2006. He is currently heading the Center for Biopharmaceuticals, which is an interdisciplinary center focusing on protein medicinal chemistry. The Strømgaard lab explores membrane-bound proteins and their downstream signaling proteins using a combination of chemical and biological approaches. In addition, Dr. Strømgaard is cofounder of a biotech company, Avilex Pharma, which explores peptidebased inhibitors of protein–protein interactions as a novel treatment for stroke.

is a professor of medicinal chemistry in the Department of Drug Design and Pharmacology, Faculty of Health and Medical Sciences, at the University of Copenhagen, Copenhagen, Denmark. In 1970, he received his PhD in natural product chemistry from the former Royal Danish School of Pharmacy. As an associate professor, he established a research program focusing on the conversion of naturally occurring toxins into specific pharmacological tools and therapeutic agents. Key lead structures in this research program were the Amanita muscaria constituents, muscimol and ibotenic acid, and the Areca nut alkaloid, arecoline, all of which interact nonselectively with GABA, glutamate, and muscarinic receptors, respectively. The redesign of muscimol resulted in a variety of specific GABA agonists, notably THIP and isoguvacine, and specific GABA uptake inhibitors, including nipecotic acid and guvacine. Ibotenic acid was converted into a broad range of subtype-selective glutamate receptor agonists, including AMPA, from which the AMPA receptor subgroup was named. Arecoline was redesigned to provide a variety of subtypeselective muscarinic agonists and antagonists. Whereas nipecotic acid was subsequently developed into the antiepileptic agent tiagabine, THIP is currently used in advanced clinical trials.

In 1980, Dr. Krogsgaard-Larsen received his DSc. He has published nearly 460 scientific papers and edited a number of books, and during the period 1998–2013, he was editor of the Journal of Medicinal Chemistry. He has been awarded honorary doctorates at the universities of Strasbourg (1992), Uppsala (2000), and Milan (2008), apart from receiving numerous other scientific awards and prizes. He is a member of a number of academies, including the Royal Danish Academy of Sciences and Letters. In 2002, he founded the Drug Research Academy as an academic/industrial research training center. He is currently chairman of the Brain Prize Foundation under the Lundbeck Foundation, member of the board of the Lundbeck Foundation, and deputy chairman of the Benzon Foundation. During the period 2003–2011, he was chairman of the Carlsberg Foundation.

is currently director at the School of Pharmaceutical Sciences, Faculty of Health and Medical Sciences, University of Copenhagen, Copenhagen, Denmark. In 1988, he received his PhD in medicinal chemistry from the Royal Danish School of Pharmacy, where he later became an associate professor in the Department of Medicinal Chemistry. Dr. Madsen has been a visiting scientist at the University of Sydney, Australia; at Johann Wolfgang Goethe University, Frankfurt, Germany; and at Syntex Research, California. He has extensive research experience with design and synthesis of glutamate receptor ligands. This includes structure activity studies and development of selective x Editors ligands for ionotropic and metabotropic glutamate receptors, work that has led to a number of important pharmacological tools. Compounds with antagonist activities have shown neuroprotective properties in animal models and are consequently leads for potential therapeutic candidates. Projects involving biostructure-based drug designs have resulted in the development of important pharmacological agents with high subtype selectivity. The work generally involves the synthesis of heterocyclic compounds, the use of bioisosteric principles, and molecular pharmacology on native and recombinant receptors. The work has led to 120 scientific papers. Before becoming school director in 2012, Dr. Madsen was the associate dean at the former Faculty of Pharmaceutical Sciences and before that head of the Department of Medicinal Chemistry for nine