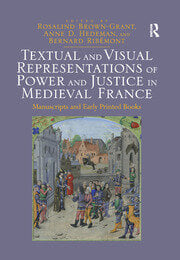 Textual and Visual Representations of Power and Justice in Medieval France: Manuscripts and Early Printed Books

Thoroughly interdisciplinary in approach, this volume examines how concepts such as the exercising of power, the distribution of justice, and transgression against the law were treated in both textual and pictorial terms in works produced and circulated in medieval French manuscripts and early printed books. Analysing texts ranging from romances, political allegories, chivalric biographies, and catalogues of famous men and women, through saints’ lives, mystery plays and Books of Hours, to works of Roman, canon and customary law, these studies offer new insights into the diverse ways in which the language and imagery of politics and justice permeated French culture, particularly in the later Middle Ages. Organized around three closely related themes - the prince as a just ruler, the figure of the judge, and the role of the queen in relation to matters of justice - the issues addressed in these studies, such as what constitutes a just war, what treatment should be meted out to prisoners, what personal qualities are needed for the role of lawgiver, and what limits are placed on women’s participation in judicial processes, are ones that are still the subject of debate today. What the contributors show above all is the degree of political engagement on the part of writers and artists responsible for cultural production in this period. With their textual strategies of exemplification, allegorization, and satirical deprecation, and their visual strategies of hierarchical ordering, spatial organization and symbolic allusion, these figures aimed to show that the pen and paintbrush could aspire to being as mighty as the sword wielded by Lady Justice herself.

Contents: Introduction, Rosalind Brown-Grant; Translating power for the Princes of the Blood: Laurent de Premierfait’s Des cas des nobles hommes et femmes, Anne D. Hedeman; How to wield power with justice: the 15th-century Roman de Florimont as a Burgundian ‘Mirror for Princes’, Rosalind Brown-Grant; The just captain in the Jouvencel by Jean de Bueil, Michelle Szkilnik; Reconfiguring queen truth in Paris, BnF, Ms. fr. 22542 (Songe du vieil pelerin), Kristin Bourassa; Allegorical design and political image-making in late medieval France, Cynthia J. Brown; The wolf, the shepherd, and the whale: critiquing the king through metaphor in the reign of Louis XI, Lydwine Scordia; Passing sentence: variations on the figure of the judge in French political, legal, and historical texts from the 13th to the 15th century, Barbara Denis-Morel; The judge and the martyr: images of power and justice in religious manuscripts from the 12th to the 15th century, Maïté Billoré and Esther Dehoux; Beastly power, holy justice in late medieval France: from Robert Gobin’s Loups ravissans to Books of Hours, Mary Beth Winn; The queen on trial: spectacle of innocence, performance of beauty, Yasmina Foehr-Janssens; Claude of France: justice, power, and the queen as advocate for her people, Kathleen Wilson-Chevalier; List of manuscripts and early printed editions cited; Bibliography; Index.