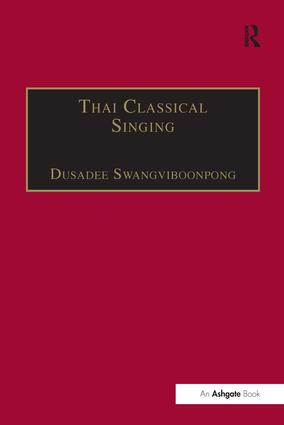 Thai classical singing is a genre that blossomed during the golden age of music in the royal court at Bangkok during the nineteenth century. It took a variety of forms including unaccompanied songs used for narration in plays, instrumental music that was used to accompany mimed actions, and songs of entertainment accompanied by an instrumental ensemble. Today, Thai classical singing is found widely outside the court, and its influence is evident in many traditional songs. This book is the first in English to provide a detailed study of Thai classical singing. Dusadee Swangviboonpong discusses the historical background to this long-established genre, the vocal techniques that it employs, the contexts in which it is performed, the degree of improvisation that performers use, the setting of texts and the methods used to teach the songs. Teaching methods still tend to focus on oral transmission, although there have been recent attempts by the Thai authorities to standardize the way singing is taught and practised. These controls are, argues the author, a threat to the the variety in style and approach that has characterised this music and kept it alive. The book features transcriptions of Thai classical songs and a glossary of Thai terms, so making it a useful introduction to the genre.

'Dusadee's book is extraordinary in that it is a thorough treatment of Thai classical singing. It has been well researched and makes a large contribution to the literature. It will be of much interest to students of Thai music and others who focus on Thai arts and humanities. Dusadee's command of the topic, Thai classical singing, makes it a unique and valuable monograph.' Crossroads 'Dusadee Swangviboonpong has made a marvelous contribution to the small but growing body of Western-language empirical scholarship devoted to the classical music of Thailand… Swangviboonpong's volume is sure to serve as a model for empirical study by a musician writing about his own tradition, which simultaneously speaks to a global scholarly audience. The book is a carefully conceived and well-rounded study.' Notes

Dusadee Swangviboonpong, is Leverhulme research fellow at the Department of Music, School of Oriental and African Studies, University of London, UK. He is a distinguished Thai classical singer and musician who has performed frequently in Thailand and Europe. Dr Swangviboonpong has also taught Thai Classical Singing in both Thailand and the United Kingdom