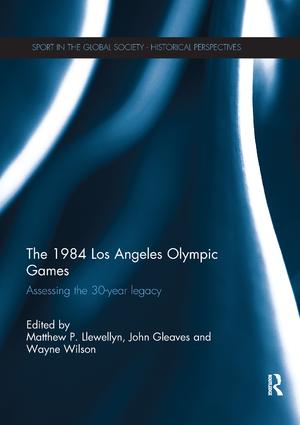 The 1984 Los Angeles Olympic Games stand as the most profitable and arguably the most important event in the history of the modern Olympic movement. Fresh off the back of the financially disastrous Montreal Games of 1976 and the politically controversial Moscow Games of 1980, the Olympic movement returned to the United States for the sixth time in an attempt to salvage the economic viability and global prestige of the Olympics. The Los Angeles Olympics proved to be both provocative and polarizing. On the one hand they have been heralded as an overwhelming, transformative success, ushering the Olympic movement into the modern commercial age. On the other hand, critics have repudiated the Games as a manifestation of commercial excess and a platform for western political and cultural propaganda.

In conjunction with the 30th anniversary of the Los Angeles Olympics, this volume examines their legacy. With an international collection of contributing scholars, this volume will span a range of global legacies, including the increasing commercialization of the Games, the changing participation of women, the Communist boycott movement, nationalism and sporting identity, and the modernization and California-cation of the Games. This book was originally published as a special issue of the International Journal of the History of Sport.

1. The Russians are Not Coming: The USSR's Non- Participation in the 1984 Summer Olympic Games

2. Radio Free Europe and the Politics of Accreditation at the 1984 Los Angeles Olympic Games

5. Manufactured Dope: How the 1984 U.S. Olympic Cycling Team Rewrote the Rules on Drugs in Sport

6. Argentina and the 1984 Los Angeles Olympics

7. Why 1984 Medalist Li Ning Lit the Flame at the Beijing 2008 Olympics: The Contribution of the Los Angeles Olympics to China’s Market Reforms

8. Sports Infrastructure, Legacy, and the Paradox of the 1984 Olympic Games

Matthew P. Llewellyn is an Associate Professor of Kinesiology at the California State University, Fullerton, USA. He is also co-Director of the Centre for the Socio-Cultural Sport and Olympic Research, assistant editor of the Journal of Sport History, and the author of numerous books and journal articles on the history of sport.

is an Associate Professor of Kinesiology at the California State University, Fullerton, USA. He is also co-Director of the Centre for the Socio-Cultural Sport and Olympic Research, co-Director of the International Network for Humanistic Doping Research, and the author of numerous articles on the history and philosophy of sport.

is vice president of communication and education at the LA84 Foundation, the co-editor of the anthology Doping in Elite Sport: The Politics of Drugs in the Olympic Movement, as well as the forthcoming Oxford Handbook of Sport History and the book series "Sport in World History."