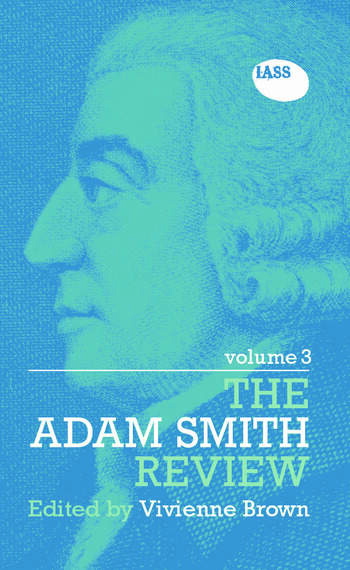 Adam Smith’s contribution to economics is well-recognised but in recent years scholars have been exploring anew the multidisciplinary nature of his works. The Adam Smith

Adam Smith’s contribution to economics is well-recognized but in recent years scholars have been exploring anew the multidisciplinary nature of his works. The Adam Smith Review provides a unique forum for interdisciplinary debate on all aspects of Adam Smith's works, his place in history, and the significance of his writings for the modern world. It is aimed at facilitating debate between scholars working across the humanities and social sciences, thus emulating the transdisciplinary reach of the Enlightenment world which Smith helped to shape.

Introduction: Smith the Hedgehog.  A Smithian Theory of Choice.  Adam Smith and New Institutional Theories of Property Rights.  Articulating Practices as Reasons: Adam Smith on the Social Conditions of Possibility of Property.  Invidious Sympathy in 'The Theory of Moral Sentiments'.  Adam Smith’s Natural Theology of Society.  The Solution is in the Text: A Survey of the Recent Literary Turn in Adam Smith Studies.  On the Incompleteness of Adam Smith’s System.  Reply to Charles Griswold: ‘On the Incompleteness of Adam Smith’s System’.  Introduction to Symposium on James R. Otteson’s Adam Smith and the Marketplace of Ideas.  Why Adam Smith is Neither a Conservative nor a Libertarian.  Adam Smith: Why Decentralized Systems?  Adam Smith’s Theoretical Endorsement of Deception.  Markets Markets Everywhere: A Brief Response to Critics.  Introduction to Symposium on Samuel Fleischacker’s On Adam Smith’s Wealth of Nations.  Hanley The Portrait and The Painter. 'The Wealth of Nations and Social Science'.  Adam Smith and the Virtues.  Response.  Book Reviews

Vivienne Brown is Professor of Intellectual History at The Open University, UK. She is the author of Adam Smith’s Discourse: Canonicity, Commerce and Conscience (1994, Routledge) and numerous articles in a range of disciplinary and interdisciplinary journals. She is the founder/editor of The Adam Smith Review on behalf of the International Adam Smith Society.