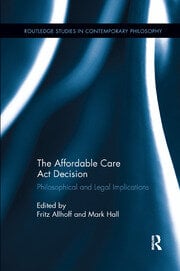 Interest in NFIB v. Sebelius has been extraordinarily high, from as soon as the legislation was passed, through lower court rulings, the Supreme Court’s grant of certiorari, and the decision itself, both for its substantive holdings and the purported behind-the-scene dynamics. Legal blogs exploded with analysis, bioethicists opined on our collective responsibilities, and philosophers tackled concepts like ‘coercion’ and the activity/inactivity distinction. This volume aims to bring together scholars from disparate fields to analyze various features of the decision. It comprises over twenty essays from a range of academic disciplines, namely law, philosophy, and political science. Essays are divided into five units: context and history, analyzing the opinions, individual liberty, Medicaid, and future implications.

Fritz Allhoff is an Associate Professor in the Department of Philosophy at Western Michigan University, USA and a Senior Research Fellow at the Centre for Applied Philosophy and Public Ethics, Australia. Dr. Allhoff serves on the International Committee of Military Medicine in Switzerland. He is the author or editor of nearly thirty books and his papers have been published in top medical ethics journals, including American Journal of Bioethics, Cambridge Quarterly of Healthcare Ethics, and Kennedy Institute of Ethics Journal. Dr. Allhoff is currently finishing a J.D. at the University of Michigan Law School.

is the Fred and Elizabeth Turnage Professor of Law and Public Health at Wake Forest University, USA, where he co-directs its Master of Arts in Bioethics program and has appointments in the Schools of Law, Medicine, and Business. He is the lead editor of the original textbook in the field, Health Care Law and Ethics (8th ed., 2013) and he has written books on various aspects of health care law and public policy. Professor Hall is currently studying health insurance reform, safety net access for the uninsured, and the legal and ethical implications of consumer-driven health care.

"An invaluable review of the most important health care legislation in America in this century. The perspectives collected here are thoughtful, temperate and insightful—attributes sadly lacking from most of the discussion in the public sphere of the Affordable Care Act. This books cuts through the rhetoric and posturing to present a useful scholarly assessment of the ACA and its likely impact on the future of health care in the United States." --Arthur L. Caplan, Drs. William F. and Virginia Connolly Mitty Professor of Bioethics, New York University Langone Medical Center

"Fritz Allhoff and Mark Hall have produced the single best book on the Supreme Court's decision upholding most of the Affordable Care Act. The wide-ranging perspectives that it includes, from some of the very best scholars in all the fields upon which the decision touches, allow readers to develop both a deep and broad understanding of the complex issues raised by the decision. No one can talk responsibly about this important decision without first benefitting from this book’s wonderful, insightful, and thorough interdisciplinary focus." --Michael J. Gerhardt, Samuel Ashe Distinguished Professor of Constitutional Law, University of North Carolina School of Law

"This wide-ranging book brings together scholars from law, philosophy, and medical ethics to illuminate one of the most important Supreme Court decisions of our time. Eschewing the partisanship that marks the public debate over healthcare reform, this book offers instead intellectual rigor, analytic clarity, and theoretic insight." --Adam Winkler, Professor, University of California at Los Angeles School of Law, USA

"The legal challenges to the Affordable Care Act will transform our understanding of individual liberty, of religious freedom, and the rights of corporations and institutions. This exciting volume goes a long way in explaining the legal landscape, the philosophical issues, and the likely implications of this landmark legislation." --Rosamond Rhodes, Professor, Mount Sinai School of Medicine, USA

"An extensive legal and philosophical analysis that is edited and written by a panoply of leading scholars." -- Einer Elhauge, Petrie Professor of Law, Harvard Law School, USA

"This book represents the cutting edge of thought on the ACA. Allhoff has compiled a balanced and thought-provoking series of chapters that relate to one of the most (in)famous pieces of legislation in a generation." -- Jesse Steinberg, University of Wisconsin-Madison, USA

"Allhoff has collected a wide-ranging and hard-hitting series of views on the NFIB v. Sebelius decision. This is a must-have for anyone interested in the legal, philosophical, or public policy aspects of the court’s action in this case." -- Wally Siewert, University of Missouri-St. Louis, USA