The Age of Happy Problems 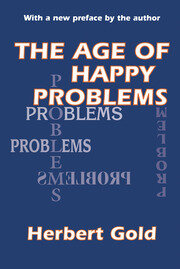 The Age of Happy Problems

In his first book of non-fiction, originally published in 1962, Herbert Gold explores some not-so-happy problems confronting people in an age of "mass destruction, mass inertia, mass everything." While acknowledging that we live in a time of utmost global significance-war on an enormous scale was a reality of the twentieth century and continues to threaten, unadulterated evil has exhibited itself in grandiose proportions-Gold tackles issues and problems which are very much of significance to the individual: teaching, writing, love, marriage, divorce, and death. In The Age of Happy Problems, Gold takes the reader through a journey of eclectic characters, situations, and locales. Part I is a selection of essays entitled "American Events." In "The Age of Happy Problems" we are presented with an analysis of the problems facing people in the middle of their lives and careers. "How to Be an Artist's Wife" explores the prospect of being married, and remaining married, to a temperamental and egotistical artist. "Divorce as a Moral Act" describes the termination of marriage as a means for renewal and the chance to start over again the search for love. "The Bachelor's Dilemma" evokes the decisions confronting the male of the "big city." And "A Dog in Brooklyn, A Girl in Detroit: A L"ife Among the Humanities" is a memoir on the paradoxes of teaching in a university. Part II is entitled "American Places." The author examines in this section various American lifestyles. In "Paris: Notes from La Vie de Boheme," Gold describes Americans abroad, why they decide to become expatriates, and how they adapt to their new surroundings. In "Greenwich Village: The Changing Village" he writes about the importance of New York City's symbol of change, experiment and nonconformity. Finally, the author meditates on "Death in Miami Beach," offering a moving account of the relationship between death and the popular Florida city. Gold writes: "How can I total it up? What is the map of the map? Well, to begin with, Plato was wrong. The life of contemplation is not sufficient...and for another thing, Plato was right. He knew that men must learn to come together in the practice of intelligence and moral privilege." Gold's essays, stemming from the author's own humanity, are just as poignant and relevant today as they were when they were first published. The Age of Happy Problems is sure to captivate, but perhaps most of all, make the reader contemplate the importance of these issues for his or her own life.