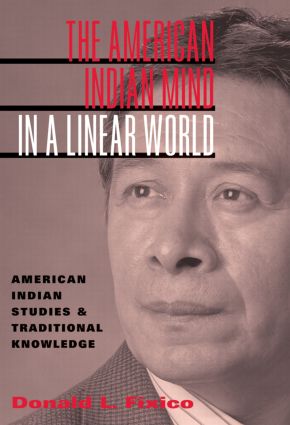 The American Indian Mind in a Linear World

First published in 2003. Routledge is an imprint of Taylor & Francis, an informa company.

"Donald Fixico, a leading historian of the indigenous experience, writes with a powerful voice from Indian Country. His provocative message about Indian ways of thought should be considered by anyone interested in Native American Studies." -- Peter Mancall, University of Southern California

"This provocative and courageous work by a leading American Indian scholar makes an important contribution to American intellectual and cultural history. It provides a valuable synthesis of key ideas and insightful introductions to major individuals, programs, and institutions. Donald Fixico has written an honest, searching, and significant book." -- Peter Iverson, Arizona State University

"Drawing on both personal experience and the abundant literature on Native Americans, Donald Fixico argues for the uniqueness of the American Indian mind, which he characterizes as representing a visual and circular philosophy based on relationship to the natural world. The book is a call for American Indian intellectual sovereignty and for the importance of perpetuating tradition to maintain identity in the modern world." -- Raymond J. DeMallie, Indiana University

"Written from an American Indian point of view, The American Indian Mind in a Linear World is a searing critical multidisciplinary review and analysis of the differences existing between the Indian and Anglo-American mind." -- Leonard Bruguier, University of South Dakota