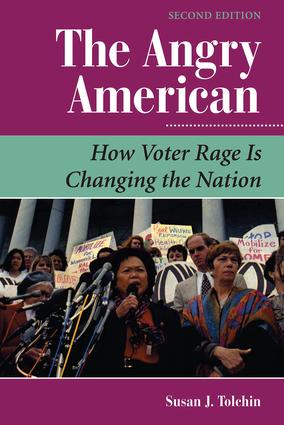 How Voter Rage Is Changing The Nation, 1st Edition

The Clinton scandals. The Rise of militia and patriot groups. The proliferation of ?trash? TV. Record U.S. trade deficits. Isolated events, or is there some connecting thread? Susan Tolchin says it's anger?mainstream, inclusive, legitimate public anger?and it's not going to vanish until we as a polity acknowledge it and harness its power. How to tap into this pervasive political anger and release its creative energy without being swept away by its force is the dilemma of the 1990s for government leaders and citizens alike. The second edition of this acclaimed volume has been completed revised and updated to account for the ways in which recent events have contributed to the history, causes, and consequences of anger in American politics today. The book embraces positive solutions to problems we are all entitled to be angry about: economic uncertainty, cultural divisiveness, political disintegration, and a world changing faster than our ability to assimilate. Tolchin's solutions incorporate a renewed sense of community, enhanced political access, and responsive rather than reactive government.

Susan J. Tolchin teaches at the Institute of Public Policy at George Mason University. Together with Martin Tolchin, she has coauthored five books, including To the Victor, Clout, Dismantling America, Buying Into America, and Selling Our Security. In 1997, she received the Marshall Dimock Award from the American Society for Public Administration.