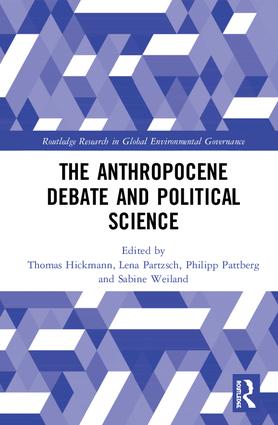 The Anthropocene Debate and Political Science

Anthropocene has become an environmental buzzword. It denotes a new geological epoch that is human‐dominated. As mounting scientific evidence reveals, humankind has fundamentally altered atmospheric, geological, hydrological, biospheric, and other Earth system processes to an extent that the risk of an irreversible system change emerges. Human societies must therefore change direction and navigate away from critical tipping points in the various ecosystems of our planet. This hypothesis has kicked off a debate not only on the geoscientific definition of the Anthropocene era, but increasingly also in the social sciences. However, the specific contribution of the social sciences disciplines and in particular that of political science still needs to be fully established.

"This remarkable collection very nicely combines conceptual, political and critical perspectives on the Anthropocene. All articles show that political science can contribute to a better understanding of the Anthropocene, but also that political science has to evolve in order to take up the challenges we face in this new era." -- Markus Lederer, Chair of International Relations, Technische Universität Darmstadt, Germany

"Can a geological epoch have politics? The Anthropocene Debate and Political Science invites us to takes this question seriously and to bring political analysis into the center of contemporary environmental debates. A timely and innovative investigation into the political life of the Anthropocene." -- Eva Lövbrand, Department of Thematic Studies: Environmental Change, Linköping University, Sweden

"The Anthropocene has conquered most public and scholarly debates on the human-nature nexus – and has often been greeted without deeper reflection about the term’s social and political implications. This superb and innovative volume addresses this gap and brings political science into a timely and much-needed dialogue with the Anthropocene concept." -- Fariborz Zelli, Associate Professor, Department of Political Science, Lund University, Sweden

1. Introduction: A Political Science Perspective on the Anthropocene

I Theories and Concepts

2. A Natural History for the 21st century: Rethinking the Anthropocene Narrative with Arendt and Adorno

3. Disentangling Descriptions and Responses to the Anthropocene: Norms and Implications of Scientific Representations of the Earth System

4. The Anthropocene and Governance: Critical Reflections on Conceptual Relations

5. International Theory in the Anthropocene: Moving beyond Species, State, and Governance

6. Security Studies and the Discourse on the Anthropocene: Shortcomings, Challenges, and Opportunities

7. Global Climate Governance as Boundary Object: Making the Meaning of the Anthropocene

8. From ‘Talking the Talk" to "Walking the Walk"? Multi-Level Global Governance of the Anthropocene in Indonesia

9. Agricultural Governance in the Anthropocene: A Research Agenda

10. Sustainability Impact Assessment of Land Use Changes in the Anthropocene

Till Hermanns and Qirui Li

11. The Nuclear Legacy in the Anthropocene: Interrelations between Nature, Technology, and Society

12. Worlds Apart? The Global South and the Anthropocene

13. The Anthropocene Concept as a Wake-Up Call for Reforming Democracy

14. Conclusions: Towards a ‘Deep Debate’ on the Anthropocene

Thomas Hickmann is a Post-Doctoral Researcher and Lecturer at the Faculty of Economics and Social Sciences of the University of Potsdam in Germany.

is a Professor of Environmental and Development Policy at the University of Freiburg in Germany.

is a Professor of Transnational Environmental Governance and Policy at Vrije Universiteit Amsterdam in The Netherlands.

is an Associate Professor of Political Science at Lille Catholic University, affiliated with the European School of Political and Social Sciences (ESPOL) in France.

Global environmental governance has been a prime concern of policy-makers since the United Nations Conference on the Human Environment in 1972. Yet, despite more than 900 multi-lateral environmental treaties coming into force over the past 40 years and numerous public-private and private initiatives to mitigate global change, human-induced environmental degradation is reaching alarming levels. Scientists see compelling evidence that the entire earth system now operates well outside safe boundaries and at rates that accelerate. According to a recent scientific assessment organized by the international Earth System Governance Project (ESGP), human societies must change course and steer away from critical tipping points that might lead to rapid and irreversible change, while ensuring sustainable livelihoods for all. The urgent challenge from a social science perspective is how to organize the co-evolution of societies and their surrounding environment, in other words, how to develop effective and equitable governance solutions for today’s global problems.

The overall institutional and organizational structure of Global Environmental Governance