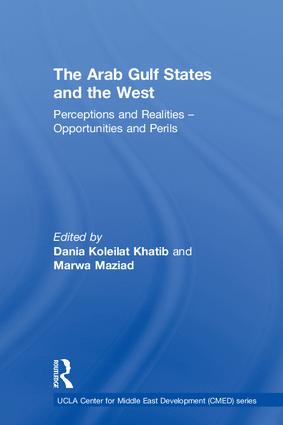 The Arab Gulf States and the West

This book examines the changing image of the Arab Gulf States in the West. It addresses the question of perception in international relations and how the Arab States of the Gulf have pursued various endeavors to project themselves into Western imagination.

The book chapters generate ideas on how perceptions came about and ways to improve cultural and political realities on the ground in the Arab Gulf States. Thus, it paves the way for a new area of research in the field of Gulf Studies that extends beyond traditional international relations frameworks by weaving elements of intercultural communication into the mix. Recognizing, yet extending beyond, a traditionally realist framework, which has dominated the analysis of Arab Gulf States' foreign relations with western countries, this book tackles both the materialist and the symbolic in the efforts and initiatives launched by the Arab Gulf States. Some chapters maintain a social-scientific approach about the politics of the Arab Gulf States in the West from an international relations lens. Others employ theoretical frameworks that were founded on the notion of the "encounter," with anthropological lenses and concepts of intercultural communication. In addition to the value of this academic research agenda, as such, some of the chapters also touch upon the added importance of policy-oriented input.

As the Arab Gulf States actively engage with the West, the book would widely appeal to students and researchers of Gulf politics and international relations.

Sectin I: Evolving Perceptions and the Arab Gulf States in the US

1. It didn’t JASTA be this way: the passage of the Justice Against Sponsors of Terrorism Act ( JASTA) as a failure of Arab lobbying – David des Roches

2. Arab Gulf States Lobbying in the US in the wake of the Arab Uprisings – Dania Koleilat Khatib

3. The United States and the Gulf in the age of Trump: perceptions, possibilities, and challenges – Charles Dunne

4. The perception of the Gulf States in France: from support of terrorism to the risks to national sovereignty – Rachid Chaker

6. The Turkish burden: the cost of the Turkey–Qatar alliance and hard power projection into Qatar’s foreign policy – Marwa Maziad

7. The continuity and change of the Gulf States' image in the Israeli epistemic community – Mohamed Youness

8. Virtual enlargement in practice: investment policy as branding in the case of Qatar and the United Arab Emirates in the crisis-hit European Union – Máté Szalai

11. The Gulf in Western hearts and minds: the dilemma of stereotypical frames and perceptions - Khalid Al-Jaber, Mokhtar Elareshi, and Abdul-Karim Ziani

Dania Koleilat Khatib currently holds the position of Executive Director at Al Istishari Al Strategy Center for Economic and Future Studies at the United Arab Emirates. She specializes in US–Arab relations with a focus on lobbying. Her research also spans media biases, sectarianism, extremismm, and governance.