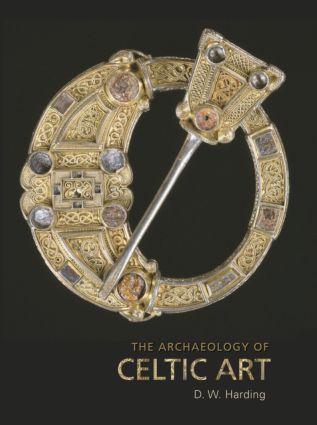 The Archaeology of Celtic Art

More wide ranging, both geographically and chronologically, than any previous study, this well-illustrated book offers a new definition of Celtic art.

Tempering the much-adopted art-historical approach, D.W. Harding argues for a broader definition of Celtic art and views it within a much wider archaeological context. He re-asserts ancient Celtic identity after a decade of deconstruction in English-language archaeology.

Harding argues that there were communities in Iron Age Europe that were identified historically as Celts, regarded themselves as Celtic, or who spoke Celtic languages, and that the art of these communities may reasonably be regarded as Celtic art.

This study will be indispensable for those people wanting to take a fresh and innovative perspective on Celtic Art.

'This is a well-written scholarly book that seeks a balanced view between the artefacts and archaeology… One of the striking features is the author's line drawings, re-drawn from various sources to provide consistency, which they do most successfully.' – Minerva

'A useful grounding source for those interested in Celtic expression.' – Northern Earth

'Familiarity with the Continental material as well as recent discoveries in Britain make it the most comprehensive study to date. The rich use of both black and white illustrations as well as some stunning colour plates..make this book excellent value for money… Harding’s study … represents an assured and knowledgeable account which will provide an invauluable foundation for new directions in Celtic art studies.’ – Cambridge Archaeological Journal