'The Army Isn't All Work'
Physical Culture and the Evolution of the British Army, 1860–1920 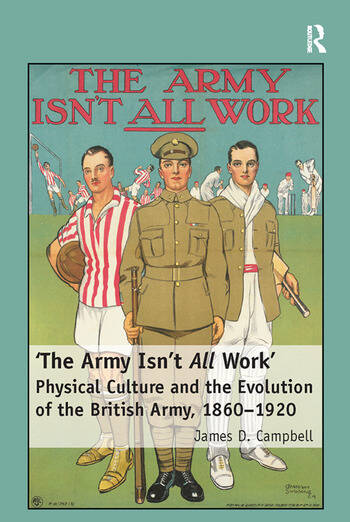 Between the Crimean War and the end of the First World War the British Army underwent a dramatic change from being an anachronistic and frequently ineffective organization to being perhaps the most professional and highly trained army in the world. Historians have tended to view that transformation through the successive political reform efforts of those years, but have largely overlooked the ways in which the Army transformed itself from within. This change was effected through the modernization of training, operational and leadership doctrines. The adoption of formal physical training and organized games played a central part in this process. With its origins in elite public schools and upper-class country homes, the Army's philosophy of Athleticism was a part of the ethos of 'muscular Christianity' widely held in contemporary British institutions. Under the potent influence of this philosophy, military sport went from a means of keeping soldiers from drink and the officers from duty, to an institutionalized form of combat training. This book documents the origins and development of formal physical training in the late Victorian Army and the ways in which the Army's gymnastic training evolved into a vital building block of the process of turning a civilian into a fighting man. It also assesses the nature and extent of British military sport, particularly regimental sports, during this period of evolution for the Army. Through an investigation of the Army's physical culture during this dynamic period, one can gain an understanding of not only how the Army's change from within occurred, but also of some of the important links between the Army and its parent society.

Contents: Introduction; Part I Mens Sana in Corpore Sano: the Origins of the Army Gymnastic Staff and Regimental Sport, 1860-1880: Officer sport: aristocrats and schoolboys; The other ranks: health, morals and morale; The army gymnastic staff and regimental sport. Part II 'Play Up and Play the Game': Physical training and Army Sport, 1880-1908: 'A marvellous improvement in the rank and file': physical training at the turn of the century; 'No better pastime for soldiers': the expansion of army and regimental sport; 'They have taken to our manly European games': military athleticism and the empire. Part III 'Training for Sport is Training for War': 1908-1914: Physical training and national preparedness; Maturity: the institutionalization of army sport; The war game: mobilization and 'the death of an army'. Part IV 'The Greater Game': Army Physical Culture in Wartime: Civilians to soldiers: sport and fitness in Kitchener's new armies; 'Make them tigers': the army physical and bayonet training staff; 'The greater game': wartime recreational training; Epilogue: 'raise the tone': the formation of the Army Sport Control Board; Select bibliography; Index.

Brigadier James D. Campbell is a career US Army officer and is currently serving as the Adjutant General of Maine. He is a graduate of the US Army War College, has a Ph.D. in British History, and has been an adjunct professor of History at the University of Maine since 2000.

'This book is visually beautiful. From the full-colour reproduction of a recruiting poster that forms the cover image to the numerous black-and-white photographs of men engaged in sporting activity that liberally illustrate it, the book is lovely to look at. And these images form only a small part of the rich seam of primary source material that James D. Campbell mines in his examination of the role and development of physical culture in the British Army between 1860 and 1920.' English Historical Review ’...this well-conceived and articulated study makes a compelling case for the extent to which reformers - within and beyond military - were successful in building up the links between the physical health and fitness of individual soldiers and army morale, and of promoting this ideal in civilian contexts as well. The book speaks to the role sport and physical fitness played in shoring up ideals about volunteerism, amateurism and leadership.’ Journal of the Society of Army Historical Research ’Campbell is breaking new ground... in his attempt to relate the army’s development of physical training to the other more recognised advances in professionalism. ...Campbell has usefully told us more about physical culture in the army than we recognised before.’ Social History