The Army and the Indonesian Genocide
Mechanics of Mass Murder 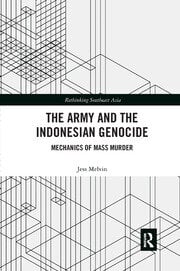 The Army and the Indonesian Genocide: Mechanics of Mass Murder

For the past half century, the Indonesian military has depicted the 1965-66 killings, which resulted in the murder of approximately one million unarmed civilians, as the outcome of a spontaneous uprising. This formulation not only denied military agency behind the killings, it also denied that the killings could ever be understood as a centralised, nation-wide campaign.

Using documents from the former Indonesian Intelligence Agency’s archives in Banda Aceh this book shatters the Indonesian government’s official propaganda account of the mass killings and proves the military’s agency behind those events. This book tells the story of the 3,000 pages of top-secret documents that comprise the Indonesian genocide files. Drawing upon these orders and records, along with the previously unheard stories of 70 survivors, perpetrators, and other eyewitness of the genocide in Aceh province it reconstructs, for the first time, a detailed narrative of the killings using the military’s own accounts of these events. This book makes the case that the 1965-66 killings can be understood as a case of genocide, as defined by the 1948 Genocide Convention.

The first book to reconstruct a detailed narrative of the genocide using the army’s own records of these events, it will be of interest to students and academics in the field of Southeast Asian Studies, History, Politics, the Cold War, Political Violence and Comparative Genocide.

2. The Struggle for the Indonesian State

Conclusion: Anatomy of a Genocide

Jess Melvin is Rice Faculty Fellow in Southeast Asia Studies and Postdoctoral Associate in Genocide Studies at the Whitney and Betty MacMillan Center for International and Area Studies at Yale University.

"She does not buy the excuse that the anticommunist killings, which swept much of the nation in the months following the coup, were spontaneous uprisings of villagers, pious Muslims outraged by godless Marxists. This is the story that the Army and successive governments have maintained with absolute propaganda into schools, the media and daily life. Even now, 53 years later, some streets fly flags at half-mast on Oct. 1 to keep the myth alive. Myth? Absolutely, according to Melvin, who has built her history on the most rock-hard foundations. She has used the Army's own records." Duncan Graham, "How to unocver bloody secrets, Jess Melvin's Way," The Jakarta Post

"This book is a breakthrough for the study of the mass murder of 1965-66. Melvin has uncovered much new evidence and has leveraged the case-study of the province of Aceh to reveal hidden aspects of the national-level decision-making. She presents an original argument on why the mass murder should be understood as a genocide. Her book is not an ordinary contribution to the field of Indonesian history -- it is a game-changer." John Roosa, University of British Columbia, Canada

"It seems impossible to overstate the significance of Jess Melvin’s monumental, heartbreaking work. Not only does she make a devastating argument that Indonesia’s mass killings constitute genocide under international law, she took a simple yet fateful step in the history of scholarship on Indonesia: she walked into a military archive and asked for their records. That nobody had done this before attests to the formidable courage it required. She analyzes thousands of pages of hitherto secret documents with patient attention to detail and unflinching moral clarity. The result transforms our understanding of Indonesian history, identity, and politics. Beautifully written, endlessly important, Jess Melvin has authored one of the great studies of genocide, anywhere. Period." Joshua Oppenheimer, Academy Award nominated director, The Act of Killing (2012) and The Look of Silence (2014), Denmark

"Melvin’s book is a dramatic breakthrough in our understanding of the Indonesian killings of 1965-66. She taps new archival sources to demonstrate powerfully that the Indonesian military was deeply engaged in planning and carrying out the murder of Indonesian communists. In the process, the military manipulated domestic and international public opinion to conceal its role in political genocide." Robert Cribb, Australian National University, Australia

"[A]n importance far beyond Indonesian studies...[it] revises our definition of genocide, draws conclusions about the close links between militarism and mass violence, and reminds us forcefully of the nefarious interventions of western powers at cold war turning points." The Guardian

"Melvin’s astonishing discovery [from the government archive in Banda Aceh] forms the core of her groundbreaking book [...] Melvin's book will forever alter the telling of what happened next. [...] The documents Melvin uses to explain how the army planned and organized the killings shatter the official narrative that has prevailed for more than fifty years and continues to be taught to Indonesian schoolchildren today." Margaret Scott, New York Review of Books