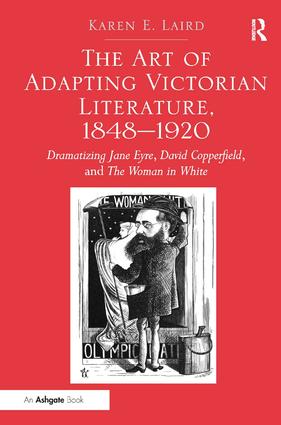 In The Art of Adapting Victorian Literature, 1848-1920, Karen E. Laird alternates between readings of nineteenth-century stage and twentieth-century silent film adaptations to investigate the working practices of the first adapters of Victorian fiction. Laird’s juxtaposition between stage and screen brings to life the dynamic culture of literary adaptation as it developed throughout the long nineteenth-century. Focusing on Charlotte BrontÃ«’s Jane Eyre, Charles Dickens’s David Copperfield, and Wilkie Collins’s The Woman in White, Laird demonstrates how adaptations performed the valuable cultural work of expanding the original novel’s readership across class and gender divides, exporting the English novel to America, and commemorating the novelists through adaptations that functioned as virtual literary tourism. Bridging the divide between literary criticism, film studies, and theatre history, Laird’s book reveals how the Victorian adapters set the stage for our contemporary film adaptation industry.

Karen E. Laird has taught courses in Victorian literature and film history at the University of Colorado, the University of Missouri, Stephens College, and the University of Salford. She has published articles on literary adaptation in such journals as Women’s Writing, Nineteenth-Century Contexts, and Literature/Film Quarterly. Karen lives and writes in Manchester, England.