The Art of Short Form Content
From Concept to Color Correction 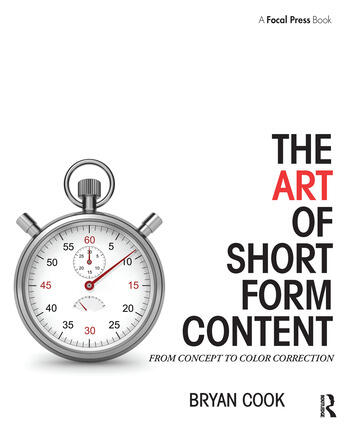 The Art of Short Form Content: From Concept to Color Correction

The Art of Short Form Content: From Concept to Color Correction is an in-depth examination of the craft of creating short form filmic content – a category which includes television commercials, music videos, television promos, movie trailers, digital billboards, corporate videos, and pretty much anything else with a running time under five minutes. Though short form is an important part of the film industry, it is typically overlooked in books on the art of filmmaking. The Art of Short Form Content fills this industry void by answering the type of questions that working short form content creators deal with every day. As Cook explains, though short form content is limited in duration, it is not limited in quality and message. In this step-by-step, full-color guide you will find:

• Strategies for how to quickly attract viewer attention to your content

• A comprehensive companion website that can be found at www.focalpress.com/cw/cook

Chapter One - Signal Through Noise: The Concept

Chapter Two - Tom Cruise and a Bazooka: The Image

Chapter Three - Into the Windowless Rooms: On Editing

Chapter Four - Because Tramps Like Us, Baby We Were Born to Run: On Music

Bryan Cook is currently the Executive Content Producer and Director of Multimedia at Team One Advertising in Los Angeles. Over the course of Bryan's fifteen year career as an Editor and Post Producer, he has partnered with many of the best ad agencies, networks and production shops in the world, and projects he has worked on have been honored by Ad Age, Adweek, Cannes, The Effie Awards, The Facebook Awards, FWA, The Golden Trailer Awards, and the Tribeca Film Festival.