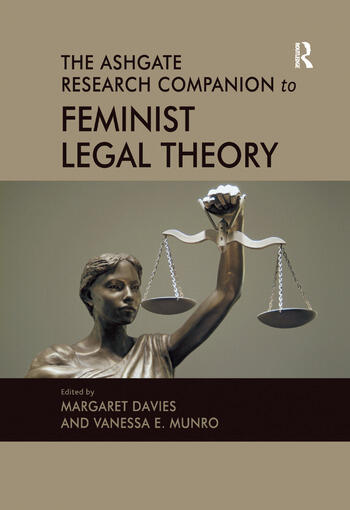 As a distinct scholarly contribution to law, feminist legal theory is now well over three decades old. Those three decades have seen consolidation and renewal of its central concerns as well as remarkable growth, dynamism and change. This Companion celebrates the strength of feminist legal thought, which is manifested in this dynamic combination of stability and change, as well as in the diversity of perspectives and methodologies, and the extensive range of subject-matters, which are now included within its ambit. Bringing together contributors from across a range of jurisdictions and legal traditions, the book provides a concise but critical review of existing theory in relation to the core issues or concepts that have animated, and continue to animate, feminism. It provides an authoritative and scholarly review of contemporary feminist legal thought, and seeks to contribute to the ongoing development of some of its new approaches, perspectives, and subject-matters. The Companion is divided into three parts, dealing with 'Theory', 'Concepts' and 'Issues'. The first part addresses theoretical questions which are of significance to law, but which also connect to feminist theory at the broadest and most interdisciplinary level. The second part also draws on general feminist theory, but with a more specific focus on debates about equality and difference, race, culture, religion, and sexuality. The 'Issues' section considers in detail more specific areas of substantive legal controversy.

’This wonderful collection provides a fitting tribute to the dynamism and diversity of contemporary feminist legal theory. Bringing together leading scholars, it achieves the admirable feat of simultaneously providing an authoritative and highly accessible introduction to a rich and evolving body of scholarship, whilst simultaneously advancing the field through numerous original insights. It deserves to be very widely read.’ Sally Sheldon, Kent Law School, UK ’This book is the essential companion for feminist or critical legal scholars seeking theoretically grounded, contemporary reflections on feminist legal thought. The chapters are a wonderful guide through key concepts and theoretical strands, introducing some of the foremost scholars in feminist (legal) thought, and, like all good companions, inviting an ongoing conversation about the directions and possibilities of feminist legal scholarship.’ Doris Buss, Carleton University, Canada ’This book will be a wise and feisty companion to all explorers of feminist legal theory. It offers readers not only fresh perspectives on familiar feminist debates about law, but also steers them securely in uncharted territory. The Companion manages all this in sparkling and accessible style, without glossing over the complexities of and contradictions in the field.’ Hilary Charlesworth, Australian National University, Australia