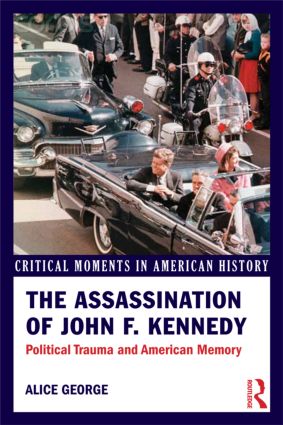 The Assassination of John F. Kennedy

On November 22nd, 1963 the assassination of President John F. Kennedy set into motion a series of events that irrevocably changed American politics and culture. The media frenzy spawned by the controversy surrounding the death of JFK has since given way to a powerful public memory that continues to shape the way we understand politics, the 1960s, and the nation.

In The Assassination of John F. Kennedy: Political Trauma and American Memory, Alice George traces the events of Kennedy’s assassination and Lyndon B. Johnson’s subsequent ascension to the presidency. Covering both the political shifts of the time and the cultural fallout of the national tragedy, this book introduces students of the twenty-first century to both an iconic event and to the context in which that event was heralded as iconic. Drawing on newspaper articles, political speeches, letters, and diaries, George critically re-examines the event of JFK’s death and its persistent political and cultural legacy.

"Amazingly, almost a half century after the event, students and the general public remain fascinated by the Kennedy assassination. Alice George deftly provides the context and balance so often missing from overheated discussions of the event. She opens a wide window, treating Kennedy, the man and the myth—and rendering a sense of the horror and intensity of November 22, 1963 and its aftermath. This is a valuable, well-researched, thoughtful work."

"Alice George gives us an admirably concise account of the events and circumstances immediately surrounding President Kennedy’s death as well as a marvelously balanced, even-handed analysis of the competing theories of the crime. She skillfully employs her dual skills as a professional journalist and historian to bring forth a marvelously paced narrative, interspersed with firsthand accounts and important documents that will stoke the memories of those who were alive in November 1963 as well as spark the interest of those for whom the JFK assassination may be more myth than history."

Chapter Three: Mourning in the Shadows

Alice L. George is an independent historian. She is the author of Awaiting Armageddon: How Americans Faced the Cuban Missile Crisis.