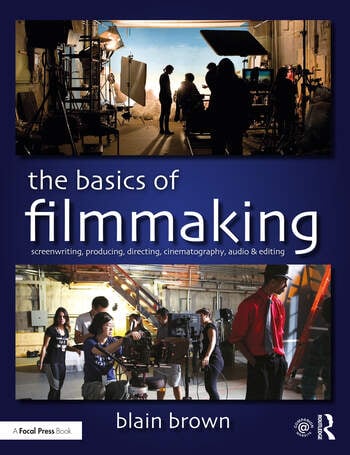 The Basics of Filmmaking is an introductory textbook tailored to the needs of beginning and intermediate film students and independent filmmakers that expertly guides you through the entirety of the craft, from screenwriting all the way through to editing, with detailed chapters covering each department involved in the filmmaking process.

The book takes a behind-the-scenes look at every aspect of the filmmaking process: writing the screenplay (and getting it critiqued by a professional), pre-production, cinematography, lighting, the shooting process, getting good audio, editing, and even going to a pitch meeting to sell it. It addresses the real fundamentals, the mechanics and the basic concepts of how to write, produce, direct, shoot, record, and edit your movie.

Written by Blain Brown, a seasoned expert who has worked professionally as a cinematographer, screenwriter, director, producer, line producer, assistant director, gaffer, grip, and editor; this is a must have resource for any filmmaking student.

Featuring an accompanying companion website with video examples of scene directing methods, continuity and coverage, working with the camera, lighting, audio, and editing, and downloadable production forms you can fill out and use for your projects.

THE WORK OF THE DIRECTOR

THE WORK OF THE EDITOR

GETTING STARTED IN THE BUSINESS

Blain Brown has been in the film business for over 30 years, working as a director of photography, director, screenwriter, producer, and editor. Before becoming a DP/Director, he worked as a lighting technician, gaffer, and grip. He has written, directed, and photographed feature films, commercials, music videos, and corporate videos. He has taught at several film schools in the Los Angeles area, including Columbia College, UCLA, Los Angeles Film School, and AFI. He studied architecture and planning at MIT, and the Harvard Graduate School of Design. His other books include Cinematography: Theory and Practice (3rd edition), Motion Picture and Video Lighting (3rd edition), and The Filmmaker’s Guide to Digital Imaging.