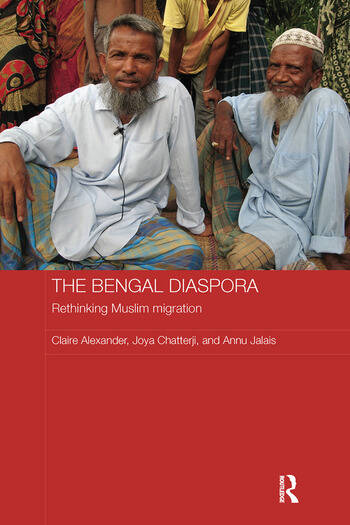 India’s partition in 1947 and the creation of Bangladesh in 1971 saw the displacement and resettling of millions of Muslims and Hindus, resulting in profound transformations across the region. A third of the region’s population sought shelter across new borders, almost all of them resettling in the Bengal delta itself. A similar number were internally displaced, while others moved to the Middle East, North America and Europe.

Using a creative interdisciplinary approach combining historical, sociological and anthropological approaches to migration and diaspora this book explores the experiences of Bengali Muslim migrants through this period of upheaval and transformation. It draws on over 200 interviews conducted in Britain, India, and Bangladesh, tracing migration and settlement within, and from, the Bengal delta region in the period after 1947. Focussing on migration and diaspora ‘from below’, it teases out fascinating ‘hidden’ migrant stories, including those of women, refugees, and displaced people. It reveals surprising similarities, and important differences, in the experience of Muslim migrants in widely different contexts and places, whether in the towns and hamlets of Bengal delta, or in the cities of Britain. Counter-posing accounts of the structures that frame migration with the textures of how migrants shape their own movement, it examines what it means to make new homes in a context of diaspora. The book is also unique in its focus on the experiences of those who stayed behind, and in its analysis of ruptures in the migration process. Importantly, the book seeks to challenge crude attitudes to ‘Muslim’ migrants, which assume their cultural and religious homogeneity, and to humanize contemporary discourses around global migration.

This ground-breaking new research offers an essential contribution to the field of South Asian Studies, Diaspora Studies, and Society and Culture Studies.

Introduction 1. Pre-histories of Mobility and Immobility: The Bengal delta and the ‘eastern zone’, 1857-1947 2. Dispositions and Destinations in the Bengal Muslim Diaspora, 1947-2007 3. Belonging, Status, and Religion: Migrants on the ‘peripheries’ 4. Making Home: Claiming and contesting diasporic space in Britain 5. ‘Always/already migrants’: Brides, marriage, and migration 6. Building a tazia, Becoming a paik: ‘Bihari’ identity amid a hostile Bengali universe 7. Rituals of Diaspora: The Shahid Minar and the struggle for diasporic space 8. Narrating Diaspora: Community histories and the politics of assimilation. Conclusion

Claire Alexander is Professor of Sociology at the University of Manchester, UK. Her publications include The Art of Being Black (1996) and The Asian Gang (2000).

is Professor of South Asian History at the University of Cambridge, UK. Her publications include Bengal Divided (1995) and The Spoils of Partition (2007), and she is the co-editor of the Routledge Handbook of the South Asian Diaspora (2014).

is Assistant Professor of South Asian Studies, National University of Singapore, Singapore. Her publications include Forest of Tigers (2010).