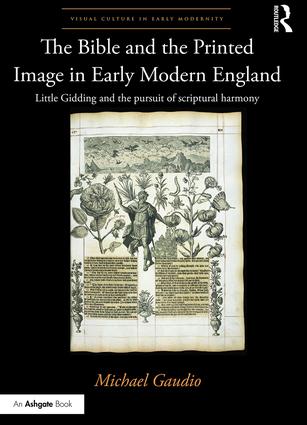 The Bible and the Printed Image in Early Modern England

Little Gidding and the pursuit of scriptural harmony, 1st Edition

The first book-length study of the fifteen surviving Little Gidding bible concordances, this book examines the visual culture of print in seventeenth-century England through the lens of one extraordinary family and their hand-made biblical manuscripts. The volumes were created by the women of the Ferrar-Collet family of Little Gidding, who selected works from the family's collection of Catholic religious prints, and then cut and pasted prints and print fragments, along with verses excised from the bible, and composed them in artful arrangements on the page in the manner of collage. Gaudio shows that by cutting, recombining, and pasting multi-scaled print fragments, the Ferrar-Collet family put into practice a remarkably flexible pictorial language. The Little Gidding concordances provide an occasion to explore how the manipulation of print could be a means of thinking through some of the most pressing religious and political questions of the pre-civil war period: the coherence of printed scripture, the nature of sovereignty, the relevance of the Mosaic law, and the protestant reform of images. By foregrounding the Ferrar-Collets' engagement with the print fragment, this book extends the scope of early modern print history beyond the printmaker's studio and expands our understanding of the ways an early modern Protestant community could productively engage with the religious image. Contrary to the long-held view that the English Reformation led to a decline in the importance of the religious image, this study demonstrates the ongoing vitality of religious prints in early modern England as instruments for thinking.

"The visual image and its manipulation through bodily activities and tools seem to provide the crucial in-between, a different form of reading in which the senses are actively employed. The Bible and the Printed Image in Early Modern England thus offers yet another concept of what reading can be, and makes a contribution to the heterogeneous histories of early-modern reading that are so crucial to the study of print culture. …What is distinctive about this book and what prevents it from fitting into traditional categories of knowledge, is precisely what makes it such a productive example of the potential of print culture."

Chapter 1: Rend and Repair: print culture, female handiwork, and the making of the concordances

Chapter 2: The word made flesh: thinking incarnationally with scripture

Chapter 3: Between the law and the gospel: thinking figurally with scripture

Michael Gaudio is Associate Professor of Art History at the University of Minnesota, USA.