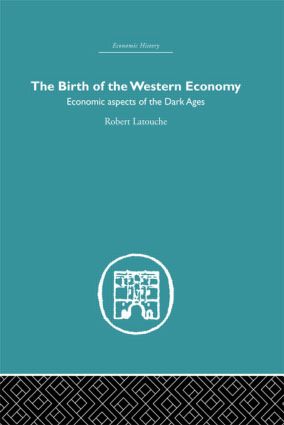 The Birth of the Western Economy

First published in 2005. Routledge is an imprint of Taylor & Francis, an informa company.

Part I. The Component Forces

I The Roman World: state control in the late Empire 3

IV The Christian Church: its economic doctrine: the result of its triumph 48

I Farming and Agriculture in the very early Middle Ages: old theories and new horizons 59

IV The so-called ‘Grand Commerce’ of the Merovingian Period 117

V Coinage and Currency. The seas and shipping 126

I Charlemagne and a controlled economy. Reform of the Currency 143

II Trade and Barter under the Early Carolingians page 155

III The ‘Villa’ of Charlemagne’s time: Farming and Manufacture 176

Part IV. The Laborious Birth of a Western Civilization

I The Vikings and Scandinavian Expansion 211

II The Resurgence of Town Life and of Commercial Activity 235

M. Latouche was Professor of Mediev al History at the University of Grenoble, member of the Historical Commission of the National Centre of Scientific Research, and is the author of a number of books on the Medieval period.

Routledge Library Editions: Economic History reprints some of the most important works on economic history published in the last century.
For further information on this collection please email [email protected]