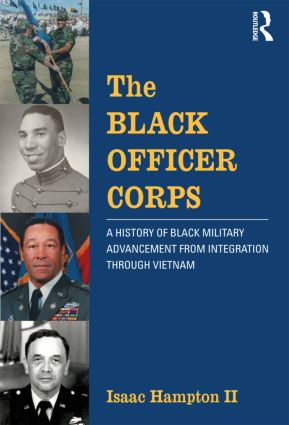 A History of Black Military Advancement from Integration through Vietnam, 1st Edition

The U.S. Armed Forces started integrating its services in 1948, and with that push, more African Americans started rising through the ranks to become officers, although the number of black officers has always been much lower than African Americans’ total percentage in the military. Astonishingly, the experiences of these unknown reformers have largely gone unexamined and unreported, until now.

traces segments of the African American officers’ experience from 1946-1973. From generals who served in the Pentagon and Vietnam, to enlisted servicemen and officers' wives, Isaac Hampton has conducted over seventy-five oral history interviews with African American officers. Through their voices, this book illuminates what they dealt with on a day to day basis, including cultural differences, racist attitudes, unfair promotion standards, the civil rights movement, Black Power, and the experience of being in ROTC at Historically Black Colleges. Hampton provides a nuanced study of the people whose service reshaped race relations in the U.S. Armed Forces, ending with how the military attempted to control racism with the creation of the Defense Race Relations Institute of 1971. The Black Officer Corps gives us a much fuller picture of the experience of black officers, and a place to start asking further questions.

"Drawing on numerous primary and secondary sources, The Black Officer Corps chronicles the tremendous struggle waged by African Americans to prove their worth as leaders in peace and war. Hampton has written a detailed and highly readable narrative tracing the black office’s experience from the American Revolution, through the 1980’s. It is an informative and valuable resource for the general reader of black military history."

James E. Westheider, author of Fighting in Vietnam: The Experiences of the U.S. Soldier

"Deeply researched and judiciously argued, Hampton’s book does justice to a long-neglected subject by exploring it in the complex historical context of the Vietnam War era—-its tensions and turmoil, opportunities and transformations."

Christian G. Appy, author of Patriots: The Vietnam War Remembered From all Sides

"Hampton has produced a valuable addition to the literature…[his collected] accounts add to a growing collection of voices and stories that will become a priceless resource for future scholars."

“Hampton’s The Black Officer Corps is a welcome addition to the growing corpus on African Americans’ military experiences. The oral histories that he conducted inform the narrative and underscore his argument that black officers struggled actively but nonradically for equality within the army system, balancing their duty as officers with the larger civil rights struggle.”

CHAPTER 1 – The Origins of the Negro Military Officer

CHAPTER 6 – Analysis and Interpretation of the Butler Report