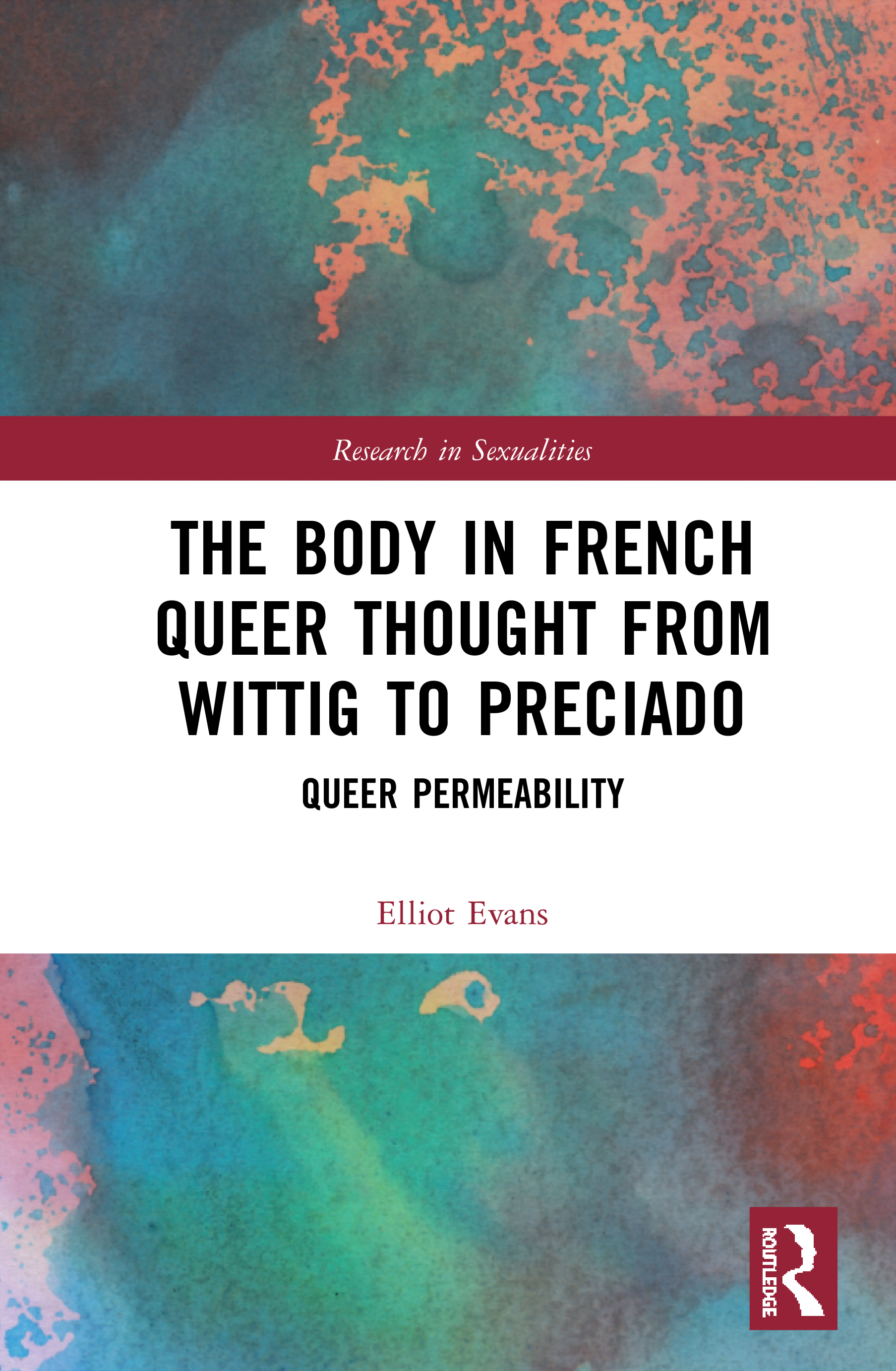 The Body in French Queer Thought from Wittig to Preciado

The Body in French Queer Thought from Wittig to Preciado: Queer Permeability

identifies a common concern in French queer works for the materiality of the body, arguing for a return to the body as fundamental to queer thought and politics, from HIV onwards.

The emergence of queer theory in France offers an opportunity to re-evaluate the state of queer thought more widely: what matters to queer theory today? The energy of queer thinking in France – grounded in activist groups and galvanised by recent hostility towards same-sex marriage and gay parenting – has re-ignited queer debates. Examining Paul B. Preciado’s experimentation with theory and pharmaceutical testosterone; Monique Wittig’s exploration of the body through radically innovative language; and, finally, the surgical performances of French artist ORLAN’s ‘Art Charnel’, this book asks how we are able to account for the material body in philosophy, literature and visual image.

This is an important work for academics and students in French Studies, in Anglophone queer studies, Gender and Sexuality Studies and Transgender Studies, and will have significant interest for specialists of cultural translation and visual art and culture.

"Tracking the rise of French queer activism in all its specificity, Elliot Evans challenges the Cartesian dualism that has compromised so much of our earlier, influential queer theorizing. In Queer Permeability, human bodies—sticky, porous, febrile, ravaged, ecstatic, abject, and singular—emerge less as objects of queer thought than as its indefatigable agents. A brilliant, necessary book, one that queer and trans thinkers on both sides of the Atlantic will want to read."

"The Body in French Queer Thought from Wittig to Preciado: Queer Permeability

is a timely and lucid exploration of what the French context can teach us about the body. Working across very different media and genres, Elliot Evans proves an excellent guide to the French resonances, and some of the unexamined genealogical roots, of queer thought."

"This book makes a major contribution to queer and transgender studies by drawing on radical French queer thought and practice of the last three decades to develop a new understanding of the entangled interimplication of the material body and language in terms of ‘queer permeability’, a porosity which poststructuralist theory has tended to ignore. The book makes a compelling argument for theory’s transitivity in its material effects on bodies. Elliot Evans persuasively counters Judith Butler’s discursivist misapprehension of Monique Wittig’s textual materialism and presents by far the most substantial critical engagement to date with two pioneering works by Paul B. Preciado, Countersexual Manifesto and Testo Junkie, as well as a considered reappraisal of the political and aesthetic significance of ORLAN’s body art."

"The conventional wisdom regarding queer theory is that it derived from the reception of French post-structuralist thought in the United States, had conceptual difficulties dealing with the materiality of the body, and was a poor fit for many of the non-Anglophone contexts to which it was subsequently exported. Elliot Evans turns that received wisdom on its head to offer a persuasive, compelling alternative genealogy for contemporary French queer theory, one rooted not merely in the conversation with its American cousin, but in continental traditions of materialist feminism and the legacies of post-revolutionary universalism."

French Theory, praxis and the particular: a ‘queer made in France’

1 Bodies beyond Language or Reason: The legacy of Descartes’s

Dualism in Poststructuralist accounts of the body

The Cartesian legacy in queer thought? Judith Butler and the

Pre- and Anti-Cartesian approaches to the philosopher’s body:

2. Queer permeability in Paul B. Preciado’s literature of entanglement:

narrating the posthuman self, performing philosophy

A literature of entanglement, or ‘Posthuman life writing’

Approaching the Real: The Death’s Head

The Lesson of French Republican Universalism:

The Importance of the Particular

Elliot Evans is a Lecturer in Modern Languages, Gender and Sexuality at the University of Birmingham, UK and co-organiser of the interdisciplinary seminar series Critical Sexology. Their research considers the meeting points of feminist, queer and transgender theories explored through the lens of psychoanalysis, literature and visual culture. They received their PhD from King’s College, London in 2017, were nominated for the Malcolm Bowie essay Prize in 2018 and were a recipient of the Crompton Scholarship in 2015. Recent publications include ‘"Wittig and Davis, Woolf and Solanas (. . .) simmer within me": Reading Feminist Archives in the Queer Writing of Paul B. Preciado’ for Paragraph (2018); a co-edited volume of essays Plaisirs de femmes: Women, Pleasure and Transgression in French Literature and Culture (2019); ‘Transforming Theory: Innovations in Critical Trans Studies’ for Paragraph (2019); and ‘your blood dazzles m/e: Reading Blood, Sex, and Intimacy in Monique Wittig and Patrick Califia’ in RAW: PrEP, Pedagogy, and the Politics of Barebacking (2019).