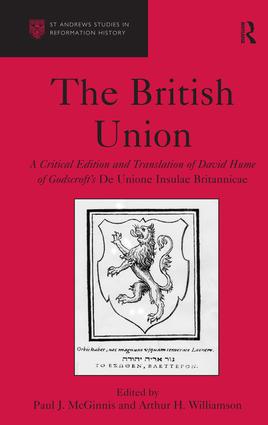 De Unione Insulae Britannicae (The British Union) is a unique seventeenth-century tract that urged the fusion of the Scottish and English kingdoms into a new British commonwealth with a radically new British identity. Its author, David Hume of Godscroft (1558-c.1630) was a major intellectual figure in Jacobean Scotland and the leading Scottish critic of the anglicizing policies of James VI. The tract was written in two parts. Published in London in 1605, the first part provides a general outline of the imperative of union. The second consists of political and constitutional proposals whereby such a union might be achieved. Its publication was suppressed and it exists only in manuscript. This is the first translation of the tract. Hume's work is breathtakingly contemporary in some of the proposals that it makes; regional assemblies combined with a national parliament, and a call for efforts to inspire the Scottish and English people into a sense of common purpose. The language and ideas of the tract display characteristics of the Renaissance combined with elements that visibly anticipate the Enlightenment. The De Unione offers extraordinary insight into the European intellectual world prior to the rise of romantic nationalism in the early nineteenth century.

'In providing the first English translation of Hume's text, Paul McGinnis and Arthur Williamson have provided invaluable possibilities for anyone interested in the political, philosophical, or religious strategies of the Jacobean period. It is, in short, a major contribution to Early Modern studies… McGinnis and Williamson's translation of De Unione may well become a seminal work in the field. It is certainly required reading for anyone wishing a deeper understanding of the Scottish Renaissance or the early Jacobean years in England.' Sixteenth Century Journal 'In providing a critical edition and translation of David Hume of Godscroft's De Unione Insulae Britannicae, Paul McGinnis and Arthur Williamson have done students and scholars of early modern Britain a tremendous service. As the first translation of Hume's tract, this edition makes readily available a much neglected text.' Early Modern Literary Studies

Contents: Introduction; The Scottish Commonwealth: from George Buchanan to David Hume; Britain's lost Renaissance: from citizen to subject; David Hume and radical Britain; The De Unione and its fate; Book One; Book Two: Andrew Melville's letter; To the reader; The necessity of a union founded on mutual love; The name: Britannia; Emblems and insignia; Treaties and ordinances; The councils; The Parliament; Offices; Currency; Commerce; Laws and the courts; Immunities and privileges; Association; Exhortation; Marriage; Education; Colonies; Religion; The oath; A British order of knighthood; Triennial visits; Society; Prayers for Britain; Summary of the argument; Apologia; Bibliography; Index.