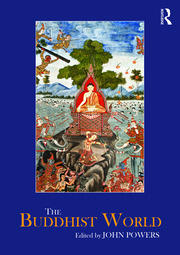 The Buddhist World joins a series of books on the world’s great religions and cultures, offering a lively and up-to-date survey of Buddhist studies for students and scholars alike. It explores regional varieties of Buddhism and core topics including buddha-nature, ritual, and pilgrimage. In addition to historical and geo-political views of Buddhism, the volume features thematic chapters on philosophical concepts such as ethics, as well as social constructs and categories such as community and family. The book also addresses lived Buddhism in its many forms, examining the ways in which modernity is reshaping traditional structures, ancient doctrines, and cosmological beliefs.

John Powers is Professor of Asian Studies in the School of Culture, History and Language, College of Asia and the Pacific, Australian National University, and a Fellow of the Australian Academy of Humanities. He is the author of fourteen books and more than seventy articles and book chapters. His publications include A Bull of a Man: Images of Masculinity, Sex, and the Body in Indian Buddhism (2015) and Historical Dictionary of Tibet (with David Templeman, 2012).

"In The Buddhist World, John Powers has brought together many of the world's best Buddhism scholars to create a volume that approaches the tradition from several key angles: historical, geographical, religious, philosophical, social, and biographical... The book as a whole is a landmark contribution, sure to be a source of information for general readers and an important research tool for scholars for many years to come."

"The Buddhist World is a remarkable introduction to Buddhism by some of the world's leading scholars. The work is breathtaking in scope, covering the entire Buddhist world in its full geographical and historical breadth. Thematic and biographical chapters offer added depth into key issues and important figures. Introducing readers to the latest, cutting-edge scholarship in accessible, jargon-free prose, this is a fabulous resource for beginning and advanced students of Buddhism alike."

"This volume covers an array of key facets of Buddhism(s), and does so with a good balance between topics and thinkers/schools. It also features essays about different Buddhist regions, including the United States."

"Combining breadth and depth, this wonderful tome discusses Buddhism on both micro and macro levels. The essays in the first three sections cover history and politics, religion and philosophy, and sociology; the last section is devoted to biographies. Rather than defining a geographic location, the collection looks at the entire Buddhist world, from its roots in India to its spread to the West. Powers (Asian studies, Australian National University) gathered the foremost scholars in each area of Buddhist studies, and the result is a book that could readily serve as a primary textbook for an undergraduate survey course; individual essays could very well serve more experienced scholars and researchers. Overall, this volume serves a broad readership, and it does so incredibly well."