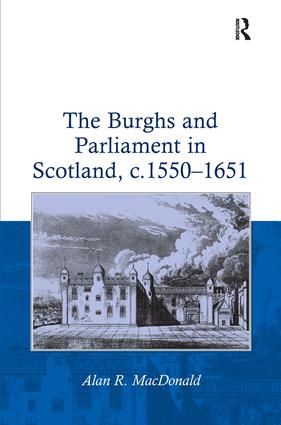 Existing studies of early modern Scotland tend to focus on the crown, the nobility and the church. Yet, from the sixteenth century, a unique national representative assembly of the towns, the Convention of Burghs, provides an insight into the activities of another key group in society. Meeting at least once a year, the Convention consisted of representatives from every parliamentary burgh, and was responsible for apportioning taxation, settling disputes between members, regulating weights and measures, negotiating with the crown on issues of concern to the merchant community. The Convention's role in relation to parliament was particularly significant, for it regulated urban representation, admitted new burghs to parliament, and co-ordinated and oversaw the conduct of the burgess estate in parliament. In this, the first full-length study of the burghs and parliament in Scotland, the influence of this institution is fully analysed over a one hundred year period. Drawing extensively on local and national sources, this book sheds new light upon the way in which parliament acted as a point of contact, a place where legislative business was done, relationships formed and status affirmed. The interactions between centre and localities, and between urban and rural elites are prominent themes, as is Edinburgh's position as the leading burgh and the host of parliament. The study builds upon existing scholarship to place Scotland within the wider British and European context and argues that the Scottish parliament was a distinctive and effective institution which was responsive to the needs of the burghs both collectively and individually.

’A valuable study, timeously published.’ Northern History ’English, Irish and Continental urban historians will find a comprehensive and lucid study that makes it much less easy for comparative works to ignore the political and economic significance of the Scottish burghs.’ Urban History ’…his careful exposition of the extant, but scanty, evidence steadily builds up to elucidate points left unclarified in broader studies of the institution or else taken for granted by other historians ….this study will become an essential handbook for anyone interested in the subject.’ Parliamentary History ’Our understanding of the burghs and parliament in Scotland has been greatly enhanced by this important research monograph. It should be of interest to a wider audience of urban historians of early modern Europe, as well as historians of early modern Scotland.’ Parliaments, Estates and Representations

Contents: Introduction; Erection and enrolment: gaining entry to parliament; Representation; The convention of burghs, the burgess estate and parliament; Individual burghs and parliament; Edinburgh: the capital and parliament; Hosting the estates; A sense of priority: status, precedence and display; Conclusion; Appendices; Bibliography; Index.

Alan R. MacDonald is Lecturer in the Department of History, University of Dundee, UK.