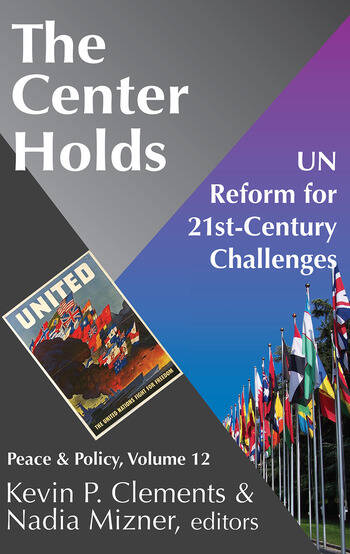 The United Nations remains a unique institutional hope for addressing and resolving the world's major environmental, developmental, and humanitarian problems. It representsglobal aspirations for a just and peaceful world by inspiring the political imagination of individuals and collectivities. But, because it is now viewed primarily as a "trade union" for expressing the national political interests of 192 state parties, as Clements and Mizner's volume of essaysdemonstrate the UN has succumbed to political cynicism and skepticism.

Only the UN can champion emerging international regimes, the rule of law, and global processes that generate structural stability, justice, and peace in the international system. Unlike some central security organs of the UN, specialized UN agencies have addressed these problems. With the exception of the wars in Afghanistan and Iraq, the UN and its affiliates have played an important role in ending violent, political conflict and in preventing further conflict. According to the Human Security Report (2005), the 80 percent decline in deadly conflicts since the early 1990s can be explained by the extraordinary upsurge of activity by the international community,which t has been directed towards conflict prevention and peace-making.

This work explores how the UN can establish global norms to reinforce adoctrine of internal and external political responsibility. How can the UN ensure that the interests of the peoples of the world receive equal attention as the interests of state parties? How does it deal with non-sovereign actors, not represented directly in the UN, who may command power and resources that are more significant than those available to nation states? How does it deal with state parties deemed ineffective, incapable, and illegitimate by their own citizens? How can the organization enhance its role with regional organizations? Finally, how will the UN ensure a positive and proactive role with respect to diverse global challenges in the early 21st century? This work is an essential guide to current discourse in the UN.

Preface, by Majid Tehranian
Introduction, by Kevin P. Clements
United Nations Reform
Illusions of Reform: Needs, Desires, and Realities, by Richard Falk
Conceptual Foundations for a New Internationalism, by Ralph Pettman
Fulfilling the Mission: Empowering the United Nations to Live Up
to the World's Expectations, by Daisaku Ikeda
New UN Initiatives for the Protection of International
Human Rights, by Ved P. Nanda
The United Nations' Role in the Management and Equitable
Distribution of Global Natural Resources,
by Sovaida Ma'ani Ewing
Improving Early Warning, Analysis, and Response Regarding
Armed Conflicts, by Hayward R. Alker
Towards a New Bandung: The Global Civil Society and
the UN Multilateral System, by Kinhide Mushakoji
Group of 77 and the United Nations Reforms, by Bagher Asadi
Contributors