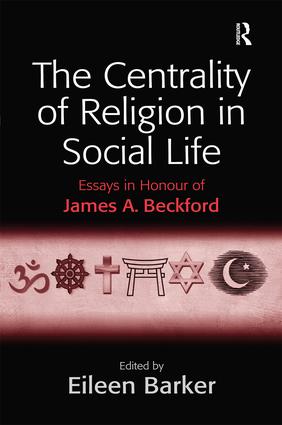 The Centrality of Religion in Social Life

Essays in Honour of James A. Beckford, 1st Edition

James A. Beckford's work is internationally acclaimed not only in the sociology of religion, but also in other fields of the social sciences. Beckford has long been arguing that the barriers that have grown up between the different sub-disciplines should be broken down, with those specialising in religion becoming more cognisant of new theoretical developments, and sociologists in general becoming more aware of the significance of developments in the religious scene. This book is a collection of essays written in Beckford's honour, drawing on a number of religious themes that have been central to Beckford's interests, whilst also offering a significant contribution to our understanding of the wider society. A central theme is modernity (and its relation to the post-modern), and how religion affects and is affected by the dynamics of contemporary society, with the primary focus of many of the chapters being a concern with how society copes with the minority religions that have become visible with the globalising tendencies of contemporary society. The contributors, who come from America, Asia and various parts of Europe, are all internationally renowned scholars. Beckford's most important publications are listed in an Appendix and the volume opens with a short account of his contribution to sociology by Eileen Barker (the editor) and James T. Richardson.

A fitting tribute to a distinguished career: this book is a celebration of James Beckford's lifelong endeavor to make religion central to social theory. David G. Bromley, Virginia Commonwealth University, USA The breadth of topics examined in this collection is evidence of James Beckford's many contributions to the sociology of religion and, more importantly, to advancing the argument that we cannot understand society -- even presumably today's "secular" society -- without some appreciation for the role of religion. A much deserved recognition. Wade Clark Roof, University of California at Santa Barbara, USA Befitting the career of James Beckford, this book contributes to a genuinely comparative sociology of religion. R. Stephen Warner, University of Illinois at Chicago, USA An excellent collection of thoughtful and often innovative essays, from some of the best sociologists of religion, developing many of the important themes so masterfully treated in Jim Beckford’s work. Chock full of helpful new insights; everyone in the sociology of religion will find something of interest and significance in this book. Lorne L. Dawson, University of Waterloo, Canada ’… a collection of the themes that are important for today’s sociology of religion […] illustrates the versatility of Beckford’s contribution to this field. … this volume is essential for anyone interested in religion’s place in contemporary society - it answers many questions and raises many new ones.’ Alternative Spirituality and Religion Review ’This book is a collection of essays written in Beckford's honour, drawing on a number of religious themes that have been central to Beckford's interests, whilst also offering a significant contribution to our understanding of the wider society.’ Theological Book Review 'There are no weak contributions to this festschrift, and all of the authors focus specifically on Beckford's interests. The collection is a fitting tribute to Beckford's work

Contents: Introduction, Eileen Barker and James T. Richardson; Part I The French Connection: Thinking sociologically about religion: contexts, concepts and clarifications, Grace Davie; Religious individualism, modern individualism and self-fulfilment: a few reflections on the origins of contemporary religious individualism, Danièle Hervieu-Léger; The paradoxes of laÃ¯cité in France: French cult controversy at the turn of the new millennium, Jean-Paul Willaime; French cult controversy at the turn of the new millennium: escalation, dissensions and new forms of mobilisations across the battlefield, Véronique Altglas; 2 different types of manifest secularization: Belgium and France compared, Karel Dobbelaere. Part II Religious Insertions in Society: The inner-world mysticism and a successful social integration of the Sikh Panth, Enzo Pace; A movement without a crisis is a movement with a crisis: a paradox in search of a paradigm, N.J. Demerath III; The European Court of Human Rights, minority religions, and the social construction of religious freedom, James T. Richardson and Jennifer Shoemaker; The trumpet sounds retreat: learning from the Jehovah's Witnesses, David Voas; Theorising conversion: can we use conversion accounts as sources to actual past processes?, Margit Warburg; From 'visiting minister' to 'Muslim chaplain': the growth of Muslim chaplaincy in Britain, 1970-2007, Sophie Gilliat-Ray. Part III Religion, Power and Politics: The religious and the political, David Martin; Religion, human power and powerlessness, Thomas Luckmann. Part IV The Spiritual and /or the Religious?: The church without and the god within? Religiosity and/or spirituality?, Eileen Barker; Contemporary religions and the public arena: centring on the situation in Japan, Susumu Shimazono; Toward a sociology of spirituality: individual religion in social/historical context, Meredith B. McGuire; Appendix; Index.

Eileen Barker PhD, OBE, FBA, Professor Emeritus of Sociology at the London School of Economics, UK. She has written over 250 publications (that have been translated into 27 languages) including New Religious Movements: A Practical Introduction and the award-winning The Making of a Moonie, now held by Ashgate. She has edited/co-edited 8 books and has been on the faculty of LSE since 1970. She is also the founder and Chair of Inform, an NGO supported by the government and mainstream Churches that provides enquirers with information about minority religions.