The Character of War in the 21st Century 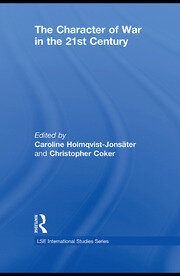 The Character of War in the 21st Century

This edited volume addresses the relationship between the essential nature of war and its character at the beginning of the twenty-first century.

The focus is on the conflicts in Iraq and Afghanistan, situations that occupy a central role in international affairs and that have become highly influential in thinking about war in the widest sense. The intellectual foundation of the volume is Clausewitz’s insight that though war has an enduring nature, its character changes with time, space, social structure and culture. The fact that war’s character varies means that different actors may interpret, experience and, ultimately, wage war differently. The conflict between the ways that war is conceptualised in the prevailing Western and international discourse, and the manner in which it plays out on the ground is a key discussion point for scholars and practitioners in the field of international relations. Contributions combine insights from social theory, philosophy, sociology and strategic studies and ask directly what contemporary war is, and what the implications are for the future.

This book will be of much interest to students of war studies, strategic studies, security studies and IR in general.

Caroline Holmqvist-Jonsäter is currently completing a PhD in the conflation of war and policing in international conflicts at the Department of War Studies, King’s College London.

Christopher Coker is Professor of International Relations at the London School of Economics and Political Science (LSE). He is the author of 11 books on war and security issues.

Introduction Caroline Holmqvist-Jonsäter  1. The Character of War and the Nature of Combat Rune Henriksen  2. Insurgency and Terrorism: Is There A Difference? Isabelle Duyvesteyn and Mario Fumerton  3. Conflict characterization and the US military: the discourse trap in post-Saddam Iraq Jeff Michaels  4. Novelty is in the eye of the beholder: understanding the Taliban in Afghanistan Antonio Giustozzi  5. Waging War Through Surprise and Terror: The Madrid Train Bombings Daniel R. Morris  6. Metastrategy and the evolving character of war between the United States and al-Q’aeda Anthony Vinci  7. War as Perpetual Policing Caroline Holmqvist-Jonsäter  8. Metro Wars of the Future Christopher Coker.  Conclusions Christopher Coker

Caroline Holmqvist-Jonsäter is currently completing a PhD at the Department of War Studies, King’s College, London.

Christopher Coker is Professor of International Relations at the London School of Economics and Political Science (LSE). He is the author of 11 books on war and security issues.