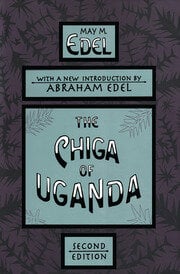 May Edel's The Chiga of Uganda is in the grand tradition of Franz Boas, Margaret Mead, and Leslie Spier. Written at a time when older ways were menaced by contact with other cultures, Edel's effort was part of a descriptive urgency that aimed to capture the past before the past disappeared. And that past should be viewed from the perspective of the people themselves, by students going into the field to observe, question, and report. This book is an enlarged and amplified edition of The Chiga of Western Uganda published in 1957 by the Oxford University Press for the International African Institute. It is enlarged by a major section on material culture hitherto unpublished.

The Chiga of Uganda provides a special insight into a culture at that time (1933) still intact under the British protectorate. It is for the most part a picture of life as it was then still being lived. Where significant changes were already taking place, the various changes are discussed in the contexts in which they seemed relevant in social structure, kinship, marriage, economics, social control, religion, and education.

What makes this edition unique is the new segment on material culture. This delves into Chiga patterns of food supply and preparation, horticulture, fire and heating, water supplies, cattle raising, hunting, fishing, and problems related to shelter, clothing, and hygiene. Two new special sections deal with tools and utensils, and, no less important, the physical skills and motor habits of the people. Edel's concrete yet wide-ranging descriptions provide an irreplaceable insight into a people and a culture at a unique point in world and colonial history.

The new introduction, written by Abraham Edel, provides a special sort of insight, drawing heavily upon the correspondence that May Edel wrote at the time. The introduction shows how the clouds of war and Nazism in Europe at the time were already changing the character and context of anthropology no less than every other area of human endeavor. A final new aspect of The Chiga of Uganda is May Edel's last reflections focusing on African tribalism, which turns out to be not all that different from ethnic and national rivalries in the Western world. This book will be indispensable to anthropologists, Africanists, and historians.