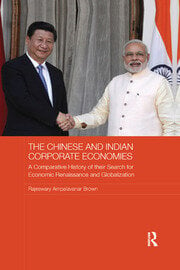 The Chinese and Indian Corporate Economies: A Comparative History of their Search for Economic Renaissance and Globalization

This is a compelling analysis of the corporate economies of China and India, which are having a huge impact not just on the international economy, but also in the geopolitical and international strategy sphere as a result of an accelerated globalisation by these two countries, which is unleashing powerful economic challenges to corporate structures, economic institutions and law worldwide. The big question is how after centuries of underdevelopment China and now India are emerging powerfully and pulling ahead of Western European economies. Analysing the role of the state and the adroit use of law, and their impact on the corporate evolution of both China and India, provides greater clarity and insight into why China has evolved as a manufacturing nation utilizing cheap abundant labour while India has not exploited such advantages but instead focused on IT and higher value industries, even abroad as Tata has demonstrated in the motor industry in Europe. Again while Chinese corporations have expanded abroad as an arm of the state into Asia, Middle East, Africa, Europe, Latin America and parts of the southern states of the USA, India has pushed principally into Europe through the efforts of powerful minority capitalists of Parsi and Gujerati background, overcoming technological gaps and differences through acquisitions and absorptions of existing corporations in particular industries, especially in steel, automobiles and textiles. In China, state owned corporations have been dominant. In India, though state owned enterprises have been powerful since 1951, it has been private capitalists with an established stronghold since the colonial period and even under the Socialist period from 1951-1991 who have been the more productive main actors both in India and abroad.

1. Two Major Asian Peripheries, China and India, and their Distinct Corporate Economies: The Silent Tongue of " One Asia Or Many".

2. The Restructuring of China’s State Owned Enterprises since 1978

3. Chinese Retailers Abroad and China’s Consumption Patterns at Home: The Prosperity of Prada and a Sorcery of Branded Luxury.

4. The Silent Vulgar Tongue: Guanxi and Trust in Chinese Corporations.

6. The Development of the Chinese Stock Market and Globalization of Chinese Corporations and Financial Markets

7. The Role of Labour in Agrarian and Industrial Dynamics of Change

8. Utilitarian Blindness to Innovation Mistaken for Sight in China’s Search for Acquisition of Western Magic Pagodas.

9. China and Globalization Strategy and Scope.

10. Corporate Institutions and Law in India: State, Space and the Capitalists.

11. Tata and Sons: Appropriating and Keeping the State in Space.

13. Rethinking the Corporate and Financial Institutions of Islam through the Moral Economy of the Waqf

14. From Empire to Independence to Economic Liberalism and Globalization: Indian Labour’s Journey

15. Chinese and Indian Corporate Economy: A Radical Construction of Law, the State and Corporations

Rajeswary Ampalavanar Brown is Emeritus Professor in International Business at Royal Holloway College, University of London. She is the author of The Indian Minority and Political Change in Malaya, 1945-1957; Capital and Entrepreneurship in South East Asia; Chinese Big Business and the Wealth of Asian Nations; The Rise of the Corporate Economy in South East Asia; and Islam in Modern Thailand: Faith, Philanthropy and Politics.

"A richly detailed and accessible comparison of development in China and India. Rajeswary Ampalavanar Brown combines insights of the economist and the business historian, weaving together first-hand knowledge of an impressive field of topics, from farms to financial markets, and from moral economy to corporate branding. Her sophisticated analysis leaves behind clichéd images of Asian business, revealing the complex interplay of global norms and culturally specific practices like waqf trusts and guanxi relations, as well as the interaction between common law and national capitalism, and corporate strategies to emulate and supplant foreign competitors."

"This insightful and ambitious book seeks to explain the contrasting pathways of capitalist transformation in two of the largest economies of the world, India and China, paying attention to the role of the state, legal infrastructure, cultural practices, and resource endowments. An essential reading for economists and historians interested in the 'emergence' of Asia, the book confirms Professor Brown’s reputation as a foremost authority on Asian capitalism."