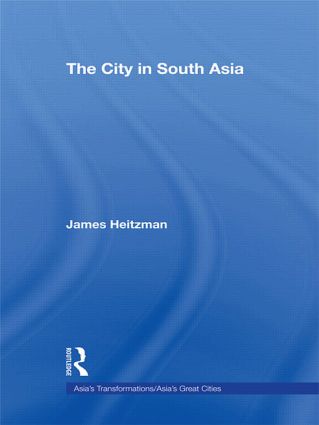 The City in South Asia

The macro-region of South Asia – including Bangladesh, India, Nepal, Pakistan, and Sri Lanka – today supports one of the world’s greatest concentrations of cities, but as James Heitzman argues in the first comprehensive treatment of urban South Asia, this has been the case for at least 5,000 years.

With a strong emphasis on the production of space and periodic excursions into literature, art and architecture, religion and public culture, this interdisciplinary study is a valuable text for students and scholars interested in comparative history, urban studies, and the social sciences.

1. The Ancient Heritage 2. The Sacred City and the Fort 3. Emporiums, Empire, and the Early Colonial Presence 4. Space, Economy and Public Culture in the Colonial City 5. Language of Space in the Contemporary City

James Heitzman is the author of Gifts of Power: Lordship in an Early Indian State and Network City: Planning the Information Society in Bangalore. He currently divides his time between Davis, California and Bangalore, India, where he is co-founder of Nagara, a trust devoted to urban affairs.

Each volume aims to capture the heartbeat of the contemporary city from multiple perspectives emblematic of the authors own deep familiarity with the distinctive faces of the city, its history, society, culture, politics and economics, and its evolving position in national, regional and global frameworks. While most volumes emphasise urban developments since the Second World War, some pay close attention to the legacy of the longue durée in shaping the contemporary. Thematic and comparative volumes address such themes as urbanization, economic and financial linkages, architecture and space, wealth and power, gendered relationships, planning and anarchy, and ethnographics in national and regional perspective.