The Civil Code of the Russian Federation
Parts 1 and 2 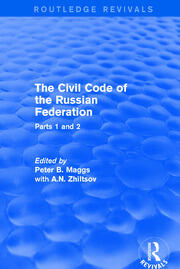 The Civil Code of the Russian Federation: Parts 1 and 2

This title was first published in 1997:  This is the definitive English translation of the new Russian Civil Code (Parts 1 and 2), often referred to as "the second Russian Constitution".

The authoritative introduction, complete table of contents. and comprehensive index combine to set this work far beyond the utility of any existing translations of the Civil Code. It will be a must-have resource for government, law and international business collections.

This fascinating work examines in detail the relationship between American politics and films, from Birth of a Nation to Fahrenheit 9/11. It provides a decade-by-decade survey of politics and films of all types - comedies and dramas to biographies and documentaries - as well as a helpful framework that students and general readers can use to analyze the political content of films. The book also features an examination of film techniques as they relate to political films, an exploration of the effects of real-world politics on Hollywood, and a practical guide to writing film analysis, as well as a guide to web-based film resources and an extensive "Political Filmography." Throughout the book, the authors emphasize both the political messages transmitted through films and the political values that are reflected in them.