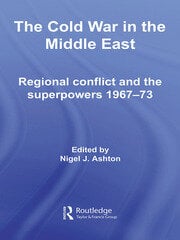 The Cold War in the Middle East: Regional Conflict and the Superpowers 1967-73

This edited volume re-assesses the relationship between the United States, the Soviet Union and key regional players in waging and halting conflict in the Middle East between 1967 and 1973. These were pivotal years in the Arab-Israeli conflict, with the effects still very much in evidence today.

In addition to addressing established debates, the book opens up new areas of controversy, in particular concerning the inter-war years and the so-called ‘War of Attrition’, and underlines the risks both Moscow and Washington were prepared to run in supporting their regional clients. The engagement of Soviet forces in the air defence of Egypt heightened the danger of escalation and made this one of the hottest regional conflicts of the Cold War era. Against this Cold War backdrop, the motives of both Israel and the Arab states in waging full-scale and lower-intensity conflict are illuminated. The overall goal of this work is to re-assess the relationship between the Cold War and regional conflict in shaping the events of this pivotal period in the Middle East.

The Cold War in the Middle East will be of much interest to students of Cold War studies, Middle Eastern history, strategic studies and international history.

1. Introduction: The Cold War and Conflict in the Middle East, 1967-73 Nigel J. Ashton  2. The Soviet Attitude toward Resolution of Conflict 1967-1973 Galia Golan  3. How US and Israeli Intelligence Failed to Estimate the Soviet Intervention in the Arab-Israeli War of Attrition Dima Adamsky  4. The "Expulsion" of the Soviet "Advisers" from Egypt, 1972 Isabella Ginor  5. The Cold War and the Six Day War: U.S. Policy toward the Arab-Israeli Crisis of June 1967 Peter Hahn  6. The Nixon Administration’s Policy towards the Arab-Israeli Conflict from 1969 to 1973 Salim Yaqub  7. Egyptian Decision-Making during the War of Attrition Laura James  8. The Big Lie and the Great Betrayal: The Impact of the June 1967 War in Arabia Spencer Mawby  9. Cold War, Hot War and Civil War: Jordan, 1967-73 Nigel Ashton  10. Syria’s Hot Wars 1967 and 1973. In the Cold War Najib Ghadbian  11. Israel’s Traumatic Pre-1967 War Experience and its Implications for its Foreign Policy Decision-Making in the Post-War Era Zaki Shalom  12. Conclusion

Nigel J. Ashton is senior lecturer in International History at LSE. He is the author of Eisenhower, Macmillan and the Problem of Nasser: Anglo-American Relations and Arab Nationalism, 1955-59 (1996) and Kennedy, Macmillan and the Cold War: The Irony of Interdependence (2002).

'...a fine volume for serious students and scholars.'
William B. Quandt, University of Virginia, USA