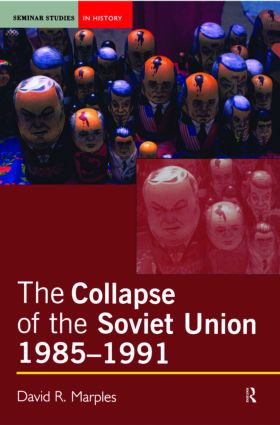 Why did the Soviet Union collapse in 1991?

The collapse of the Soviet Union has widely been seen as the result of the arms race and Cold War, and the failure of the Soviet side to keep pace with new technology. This book argues that the disintegration was mainly a result of two interrelated factors: the rise of the Soviet national republics, and the manipulation of the new Russian presidency by Boris Yeltsin in what became a direct power struggle between Yeltsin and the Soviet leader, Gorbachev.

Written in a clear and accessible manner, the book provides:

Also containing a Chronology, Glossary and Who's Who of key figures, The Collapse of the Soviet Union is essential reading for students of twentieth century European history.

PART TWO: THE YEARS OF PERESTROIKA

The Congress of People’s Deputies and New Presidency

The 28th Party Congress and Aftermath

Toward a New Union Treaty

5. THE PUTSCH AND THE COLLAPSE OF THE USSR

The Failure of the Union Treaty

6. WHY DID THE SOVIET UNION COLLAPSE?

David R. Marples is Professor of History at the University of Alberta.