The Comedies of Terence 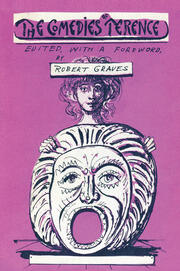 The Comedies of Terence

Terence achieved in his brief twenty-six years a standard of stylistic perfection and artistic restraint that ranked him, along with Plautus, as the greatest of the Roman comic playwrights. He was, at the very least, a gifted translator and adaptor, having used Greek New Comedies as the basis for all six of his extant plays. How far his own contribution exceeded that of simple translation is difficult to say, but we know that the Latin, undeniably his, was so faultlessly styled that his work served as a textbook for scholars and grammarians for hundreds of years.

Terence had a considerable impact on the Revival of Letters; his comedies were studied and were frequently adapted into new works by such men as Steele, Chapman, and, most famously, Moliire. Indeed, had there been no Terence, it is doubtful that the Comedy of Manners could have arisen when it did, and all comic writing for the stage, from Moilire through the Restoration drama to the present day, would be diminished for lack of him. Appropriately, the language of this translation is from the Restoration. Graves has based his version on the one made in 1689 by Laurence Echard; he has corrected inaccuracies, eliminated defects and obscurities, but retained the period tone.

Including in this book are the major comedies: The Fair Andrian, The Mother-In-Law, The Self-Tormentor, The Eunuch, The Tricks of Phormio and The Brothers. A close reading of Terence is a fine corrective to any idea that may still be current, about the glory that was Greece and grandeur that was Rome during the Hellenistic period. It is an assurance that in some respects at least, this age is not depraved at all.