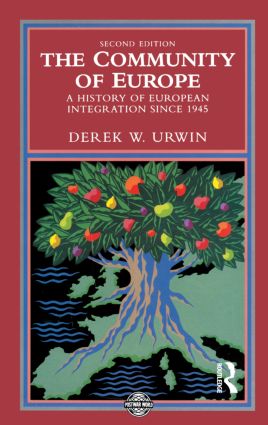 The Community of Europe

A History of European Integration Since 1945, 2nd Edition

This hugely successful history of political and economic integration in Western Europe since the Second World War -- and especially, but by no means exclusively, the European Community itself -- was first published in 1991, to general acclaim. Since then much turbulent water has flowed under the bridges of Maastricht and Strasbourg. Now, in this welcome Second Edition, Derek Urwin has brought the story fully up to date, with an account of developments since 1991 and an assessment of the mood and prospects of Europe and the Community today.

1. The persisting idea of Europe

2. The Cold War, the United States and Europe

4. The European Coal and Steel Comunity

7. The Europe of the Seven

8. De Gaulle and the EEC

9. The question of enlargement

10. Movement on all fronts

11. The revival of ambition

12. The emergence of summitry

15. The search for political integration

A guide to further reading.

Map showing the growth of the European Economic Community

Derek Urwin is Professor of Politics and International Relations at the University of Aberdeen.