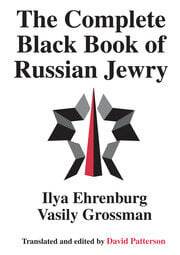 The Complete Black Book of Russian Jewryis a collection of eyewitness testimonies, letters, diaries, affidavits, and other documents on the activities of the Nazis against Jews in the camps, ghettoes, and towns of Eastern Europe. Arguably, the only apt comparism is to The Gulag Archipelago of Alexander Solzhenitsyn. This definitive edition of The Black Book, including for the first time materials omitted from previous editions, is a major addition to the literature on the Holocaust. It will be of particular interest to students, teachers, and scholars of the Holocaust and those interested in the history of Europe.

By the end of 1942, 1.4 million Jews had been killed by the Einsatzgruppen that followed the German army eastward; by the end of the war, nearly two million had been murdered in Russia and Eastern Europe. Of the six million Jews who perished in the Holocaust, about one-third fell in the territories of the USSR. The single most important text documenting that slaughter is The Black Book, compiled by two renowned Russian authors Ilya Ehrenburg and Vasily Grossman. Until now, The Black Book was only available in English in truncated editions. Because of its profound significance, this new and definitive English translation of The Complete Black Book of Russian Jewry is a major literary and intellectual event.

From the time of the outbreak of the war, Ehrenburg and Grossman collected the eyewitness testimonies that went into The Black Book. As early as 1943 they were planning its publication; the first edition appeared in 1944. During the years immediately after the war, Grossman assisted Ehrenburg in compiling additional materials for a second edition, which appeared in 1946 (in English as well as Russian).

Since the fall of the Soviet regime, Irina Ehrenburg, the daughter of Ilya Ehrenburg, has recovered the lost portions of the manuscript sent to Yad Vashem. The texts recovered by Ms. Ehrenburg include numerous documents that had been censored from the original manuscript, as well as items that had been hidden by the Grossman family. In addition, she verified and, where appropriate, corrected the accuracy of documents that had already appeared in earlier editions of The Black Book.