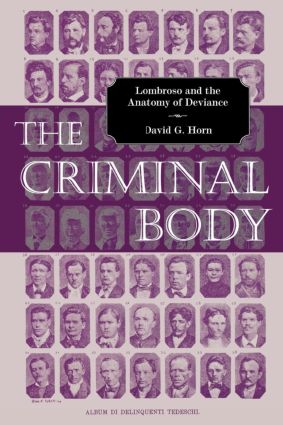 Lombroso and the Anatomy of Deviance, 1st Edition

This fascinating book traces the evolution of the "criminal body" by focusing on the work of Cesare Lombroso, an Italian physician and anthropologist, who is widely held to be the father of modern criminology. Building on Lombroso's concept of the "born criminal" and the idea that bodies could be used as evidence in criminal investigations, The Criminal Body offers an intriguing window into the origins of today's criminological science.

"Studies of the work of Cesare Lombroso are today exploding in a wide range of fields, and therefore scholars need a clear, sophisticated interpretation of Lombroso's ideas about the biology of crime and his role in the development of criminology. This is exactly what David Horn's important new study, The Criminal Body: Lombroso and the Anatomy of Deviance, gives us. By situating Lombroso's work in its historical and cultural contexts, Horn also makes an valuable contribution to the social study of the sciences of deviance." -- Nicole Rafter, Senior Research Fellow, Northeastern University

"In The Criminal Body, David Horn re-introduces us to the influential Italian School of Cesare Lombroso (1835-1909) and his followers. Few today share Lombroso's optimism, but late modern societies are obsessed more than ever with identifying those capable of inflicting intolerable losses, whether terrorists or criminals. These societies (especially the United States with its mass incarceration) find themselves increasingly caught in the link Lombroso articulated between criminal risk, scientific expertise, and governing the social. Horn's reconstruction of the power and knowledge relations of the Italian School's scientific penology is a brilliant contribution to the history and sociology of the human sciences. More importantly, he opens an otherwise locked door into a disturbing place, our present." -- Jonathan Simon, Professor of Law, University of California, Berkeley

David Horn is Associate Professor and Chair of the Department of Comparative Studies at Ohio State University. He is the author of Social Bodies: Science, Reproduction and Italian Modernity (1994).