The Criminology of War 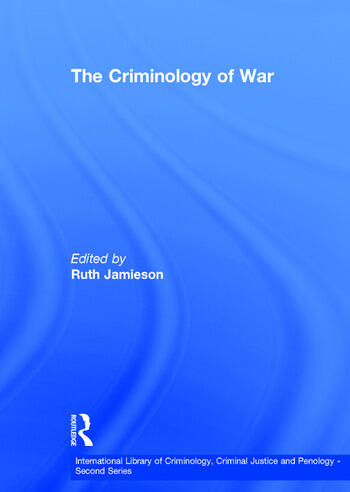 The Criminology of War

Contents: Introduction. Part I Criminologists on War: For criminology in international criminal justice, Paul Roberts and Nesam McMillan; Towards a criminology of crimes against humanity, Daniel Maier-Katkin, Daniel P. Mears and Thomas J. Bernard; Criminalizing war: criminology as ceasefire, Vincenzo Ruggiero; Criminology confronts genocide: whose side are you on?, John Hagan and Wenona Rymond-Richmond. Part II Transformations of War: Shadows and sovereigns, Carolyn Nordstrom; War as a network enterprise: the new security terrain and its implications, Mark Duffield; The transformation of violence in Iraq, Penny Green and Tony Ward. Part III Genocide and Crimes Against Humanity: Violence without moral restraint: reflections on the dehumanization of victims and victimizers, Herbert C. Kelman; Sociology after the Holocaust, Zygmunt Bauman; Genocide, civilization and modernity, Michael Freeman; Genocide and the social production of immorality, Ruth Jamieson. Part IV Normative Transformations: Abu Ghraib: imprisonment and the war on terror, Avery F. Gordon; Neither honesty nor hypocrisy: the legal reconstruction of torture, Stanley Cohen; Representing war as punishment in the war on terror, Teresa Degenhardt. Part V Gender and War: War and rape: a preliminary analysis, Ruth Seifert; The body of the other man, Dubravka Zarkov; From sisterhood to non-recognition: instrumentalization of women’s suffering in the war in the former Yugoslavia, Vesna Nikoli-Ristanovi; A continuum of violence: gender, war and peace, Cynthia Cockburn; Recognising gender-based violence against civilian men and boys in conflict situations, R. Charli Carpenter. Part VI Militarized Masculinities: No more heroes: masculinity in the infantry, John Hockey; ’I didn’t want to die so I joined them’: structuration and the process of becoming boy soldiers in Sierra Leone, Richard Maclure and Myriam Denov; Bureaucratizing masculinities among Brazilian torturers and murderers, Martha K. Huggins and

Ruth Jamieson is an Honorary Lecturer in the School of Law at Queen's University Belfast, Northern Ireland.