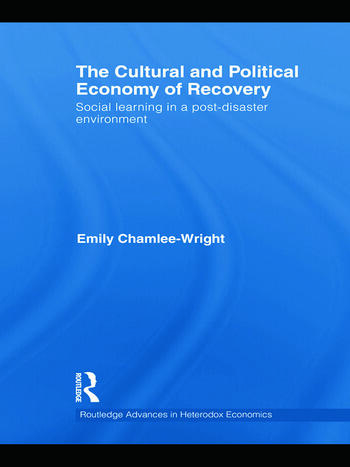 The Cultural and Political Economy of Recovery: Social Learning in a post-disaster environment

In August 2005 the nation watched as Hurricane Katrina pummelled the Gulf Coast. Residents did not just suffer the personal costs of a home that had been severely damaged or destroyed; frequently they also lost their entire neighbourhood and the social systems that under normal circumstances made their lives "work". Katrina raised the questions of whether and how communities could solve the complex social coordination problems catastrophic disaster poses, and what inhibits them from doing so?

Professor Chamlee-Wright investigates not only the nature of post-disaster recovery, but the nature of the social order itself – how societies are able to achieve a level of complex social coordination that far exceeds our ability to design. By deploying the tools of both political economy and cultural economy, the book contributes to the bourgeoning literature on the social, political and economic impact of Hurricane Katrina.

Through a selection of case studies, the author argues that post-disaster resilience depends crucially upon the discovery that unfolds within commercial and civil society. The book will be of particular interest to postgraduate students and researchers in economics, sociology and anthropology as well as disaster specialists.

'Emily Chamlee Wright has made a major contribution to understanding the response to Hurricane Katrina. Her book is a case study of the importance of spontaneously-evolved institutions in solving post-disaster collective action problems. She shows that micro social networks are often more important for recovery than large government programs.'

'In her pioneering work Chamlee-Wright has used a natural experiment in governmental failure to show that an economy is more than a machine to be run by our masters.  It is a social order, "embedded," as the sociologists say, in ethics.  She shows that such fully human actors are creative, as a Samuelsonian Max U-er is not.  We are all entrepreneurs, big or small.  The fact requires an empirical yet Austrian economics, of which Chamlee-Wright's book is a sterling example'.

'F. A. Hayek famously eschewed the term economy for its constructivist connotations. Emily Chamlee-Wright profitably reclaims it, recasting economy as a plurality of self-organizing processes, civic and cultural as well as commercial. As a work of theory and as an ethnographic investigation of post-Katrina recovery, Chamlee-Wright’s book is a bold act of intellectual entrepreneurship – signaling the explanatory possibilities of a scientifically serious hermeneutic economics.'