The Culture of Crime 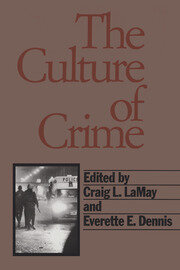 The Culture of Crime

There is no journalistic work more deserving of the designation "story" than news of crime. From antiquity, the culture of crime has been about the human condition, and whether information comes from Homer, Hollywood, or the city desk, it is a bottom about the human capacity for cruelty and suffering, about desperation and fear, about sex, race, and public morals. Facts are important to the telling of a crime story, but ultimately less so than the often apocryphal narratives we derive from them.

The Culture of Crime is hence about the most common and least studies staple of news. Its prominence dates at least to the 1830s, when the urban penny press employed violence, sex, and scandal to build dizzying high levels of circulation and begin the modern age of mass media. In its coverage of crime, in particular, the popular press represented a new kind of journalism, if not a new definition of news, that made available for public consumption whole areas of social and private life that the mercantile, elite, and political press earlier ignored. This legacy has continued unabated for 150 years. The book explores new wrinkles in the study of crime and as a mass cultural activity—from exploring the private lives of public officials to dangers posed by constraints to a free press.

The volume is prepared with the rigor of a scholarly brief but also the excitement of actual crime stories as such. Throughout, the reader is reminded that crime stories are both news and drama, and to ignore either is to diminish the other. The work delves deeply into current problems without either sentimental or trivial pursuits. It will be a volume of great interest to people in communications research, the social sciences, criminologists, and not least, the broad public which must endure the punishment of crime and the thrill of the crime story alike.