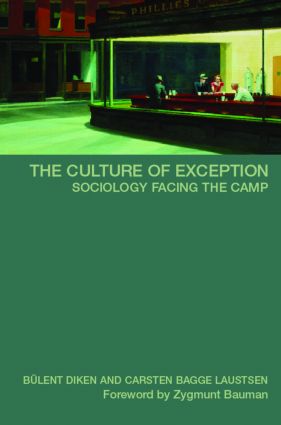 The Culture of Exception

By Bulent Diken, Carsten B. Laustsen

We live in an ever-fragmenting society, in which distinctions between culture and nature, biology and politics, law and transgression, mobility and immobility, reality and representation, seem to be disappearing. This book demonstrates the hidden logic beneath this process, which is also the logic of 'the camp'. Social theory has traditionally interpreted the camp as an anomaly, as an exceptional site situated on the margins of society, aiming to neutralize its 'failed citizens' and 'enemies'. However, in contemporary society, 'the camp' has now become the rule and consequently a new interrogation of its logic is necessary.

In this exceptional volume, the authors explore the paradox of the camp, as representing both an old fear of enclosure and a new dream of belonging. They illustrate their arguments by drawing on contemporary sites of exemption - such as refugee camps, rape camps and favelas - as well as sites of self-exemption including gated communities, party tourism and celebrity cultures.

1. Introduction. A Sociology of the Camp? Part 1: Theorizing the Camp 2. Exception and Emergency 3. Biopolitics 4. Risk and Terror Part 2: Inside the Camp 5. Spaces: From Refugee Camps to Gated Communities 6. Bodies: From Rape Camps to Sex Tourism 7. Fantasies: From Fight Club to September 11 8. In/Exclusions: From Favelas to the Spaces of Stardom Part 3: Escaping the Camp 9. Ethics After the Camp 10. Sociology After the Camp