The Dance of Death in Late Medieval and Renaissance Europe
Environmental Stress, Mortality and Social Response 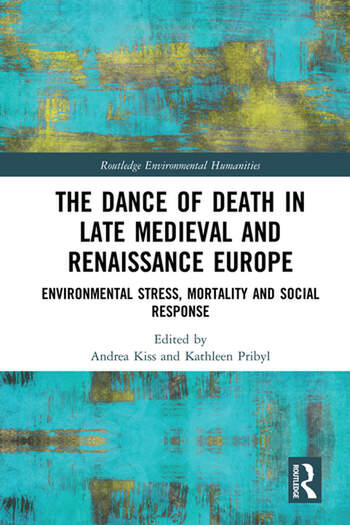 The Dance of Death in Late Medieval and Renaissance Europe: Environmental Stress, Mortality and Social Response

This volume investigates environmental and political crises that occurred in Europe during the late Middle Ages and the early Modern Period, and considers their effects on people’s lives. At this time, the fragile human existence was imagined as a ‘Dance of Death’, where anyone, regardless of social status or age, could perish unexpectedly. This book covers events ranging from cooling temperatures and the onset of the Little Ice Age, to the frequent occurrence of epidemic disease, pest infestations, food shortages and famines.

Covering the mid-fourteenth to mid-seventeenth centuries, this collection of essays considers a range of countries between Iceland (to the north), Italy (to the south), France (to the west) and the westernmost parts of Russia (to the east). This wide-reaching volume considers how deeply climate variability and changes affected and changed society in the late medieval to early modern period, and asks what factors, other than climate, interfered in the development of environmental stress and socio-economic crises.

This book will be of great interest to students and scholars of Environmental and Climate History, Environmental Humanities, Medieval and Early Modern History and Historical Geography, as well as Climate Change and Environmental Sciences.

3. The Grain trade, economic distress and social disorder at a time of environmental stress in East Anglia, 1400-ca. 1440 Kathleen Pribyl

4. War, climatic stress and environmental degradation during the 15th and 16th centuries: the case of the north Flemish coastal landscape in the estuary of the Western Scheldt Adriaan M.J. de Kraker

5. From the alpine mountain height to the Swiss Lake District: climate and society in the city and Republic of Berne from the 14th to the 16th centuries Chantal Camenisch

6. Apocalyptic riders in the borderlands: dealing with locust invasion, diseases and war in fifteenth- and sixteenth-century Eastern and Southern Austria Christian Rohr

8. The extreme year of 1540 in terms of climate variation from the perspective of historical sources derived from the Polish and Baltic territories Wiesław Nowosad and Piotr Oliński

PART 3. SOUTHERN EUROPE AND BEYOND

9. Migration patterns from Dalmatian hinterland during and after the great hunger of 1453-1454 as consequence of environmental and political crisis Zrinka Nikolić Jakus

10. The "Danse Macabre" among climatic variability, famines and epidemics in Northern Italy during the 15th and 16th centuries: an overview through documentary sources Silvia Enzi, Francesca Becherini and Mirca Sghedoni

12. Chronology and impact of a global moment in the thirteenth century: the Samalas eruption revisited Martin Bauch

Andrea Kiss is a research fellow at the Institute of Hydraulic Engineering and Water Resources Management at the Vienna University of Technology, Austria, also affiliated with the Department of Auxiliary Historical Sciences at the University of Szeged in Hungary.

"The Dance of Death is meticulous, fine-grained scholarship on the cutting edge of environmental history and buttressed by excellent maps and illustrations. This broad collection -- from Reykjavik to Dubrovnik, from the thirteenth century to the seventeenth -- is especially strong on matters pertaining to human interactions with climate, disease, and locusts." – J.R. McNeill, Professor, Edmund A. Walsh School of Foreign Service, Georgetown University, USA

"The book represents a unique collection of papers dealing with climate, environment and society in Europe during the late medieval and early modern period. It should not remain out of interest of students, scientists and further readers interested in past climate, its impacts on society and in human responses, as well as in environmental history."

"Treating the 'Dance of Death' as a metaphor for impacts warfare and environmental stress had on societies across 14th through 16th century Europe, the editors have choreographed a dozen widespread regional studies for display of diverse and shared experiences of crisis, mortality, and resilience. Recommended for students and scholars of medieval studies, environmental history, and Renaissance Europe." – Professor Richard Hoffman, Department of History, York University, Canada

"The rich array of case studies gathered in this volume from across Europe and spanning five centuries place the challenges posed by climate change today in revealing historical perspective. Materially poorer and lacking the scientific knowledge of their modern counterparts, medieval Europeans are nonetheless shown as having had to contend with such transformative environmental developments as onset of the atmospheric circulation patterns of the Little Ice Age, the global fallout from equatorial mega eruptions, the unparalleled mortality inflicted by the Second Plague Pandemic and plagues of locusts of Biblical destructiveness. How well they coped with these many extreme environmental events, especially when war repeatedly stacked the odds against them, makes fascinating and often grim reading. Equally intriguing for fellow researchers are the ways in which familiar historical sources are used in unfamiliar ways and numbers of unfamiliar sources deployed to telling effect. All those interested in the emergent field of environmental history will find much herein to reflect upon. None will want to be without this book." – Professor Bruce Campbell, The Queen’s University of Belfast, UK

"The articles in this volume throw more light on the saddle period between the late Middle Ages and the sixteenth century providing a cornucopia of new insights on the history of volcanic eruptions, climate extremes, locust invasions, famines, death, migration, grain trade and landscape transformation from all parts of Europe." – Professor Christian Pfister, University of Bern, Switzerland