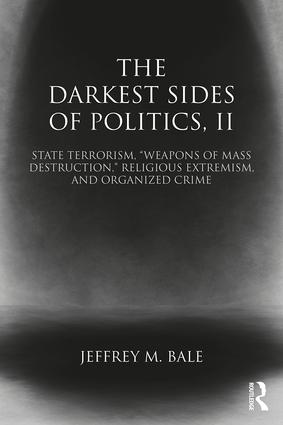 The Darkest Sides of Politics, II

This book examines a wide array of phenomena that arguably constitute the most noxious, extreme, terrifying, murderous, secretive, authoritarian, and/or anti-democratic aspects of national and international politics. Scholars should not ignore these "dark sides" of politics, however unpleasant they may be, since they influence the world in a multitude of harmful ways.

The second volume in this two-volume collection focuses primarily on assorted religious extremists, including apocalyptic millenarian cults, Islamists, and jihadist terrorist networks, as well as CBRN (chemical, biological, radiological, and nuclear) terrorism and the supposedly new "nexus" between organized criminal and extremist groups employing terrorist operational techniques. A range of global case studies are included, most of which focus on the lesser known activities of certain religious extremist milieus.

This collection should prove to be essential reading for students and researchers interested in understanding seemingly arcane but nonetheless important dimensions of recent historical and contemporary politics.

"I know of no other expert worldwide with the depth and breadth of knowledge of extremist ideologies possessed by Dr. Bale. The Darkest Sides of Politics reveals what for many readers – even seasoned scholars – will be new facets of the complex undercurrents of political extremism that plague global society."

National Consortium for the Study of Terrorism and Responses to Terrorism (START), USA.

1. Terrorists as State "Proxies": Separating Fact from Fiction 2. South Africa’s Project Coast: "Death Squads," Covert State-Sponsored Poisonings, and the Dangers of CBW Proliferation 3. "Privatizing"Covert Action: The Case of the Unification Church 4. Apocalyptic Millenarian Groups and Mass Casualty Terrorism 5. Jihādist Ideology and Strategy and the Possible Employment of WMD 6. Islamism and Totalitarianism 7. Denying the Link between Islamist Ideology and Jihādist Terrorism: “Political Correctness” and the Undermining of Counterterrorism 8. "Nothing to Do with Islam"? The Terrorism and Atrocities of the Islamic State are Inspired and Justified by Its Interpretations of Islam 9. Ahmad Rassam and the December 1999 "Millennium Plot" 10. Some Problems with the Notion of a "Nexus" between Terrorists and Criminals

Jeffrey M Bale is Professor in the Nonproliferation and Terrorism Studies Program at the Middlebury Institute of International Studies at Monterey, USA.