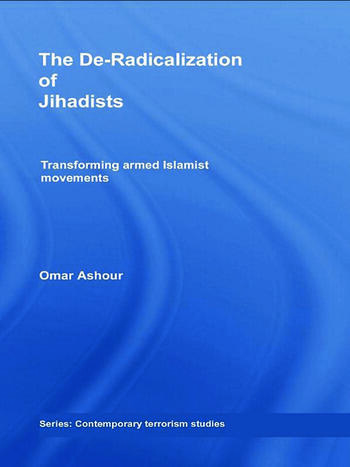 This book is the first detailed study of the causes of de-radicalization in armed Islamist movements. It is based on frontline research that includes interviews with Jihadist leaders, mid-ranking commanders, and young sympathizers, as well as former security and intelligence officers and state officials.

Additionally, it is also the first book to analyze the particular conditions under which successful de-radicalization can take place. The current literature on Islamist movements attempts to explain two principal issues: their support of violence (radicalization) and their changing attitudes towards democracy and democratization (moderation). However, the reasons behind renouncing (behavioural de-radicalization) and de-legitimizing (ideological de-radicalization) violence have not been evaluated to date. The author provides an in-depth analysis of the de-radicalization processes of the Egyptian Muslim Brothers (1951-73), former allies of al-Qa'ida, such as al-Gama'a al-Islammiyya (Islamic Group of Egypt, 1997-2002) and al-Jihad Organization (2007- present), as well as of Algerian Islamist groups (1997-2000). The book also analyzes cases of de-radicalization failure.

The two questions that the book highlights and attempts to answer are Why? and How? For example, why do radical Islamist militants revise their ideologies, strategies and objectives and initiate a de-radicalization process; and what are the necessary conditions behind successful de-radicalization? De-radicalization of Jihadists shows how a combination of charismatic leadership, state repression, social interactions and selective inducements can ultimately lead jihadists to abandon 'jihad' and de-legitimize violence.

This book will be of great interest to students of radical Islamist movements and Islamic Studies, terrorism and political violence, security studies, and Middle Eastern politics.

Omar Ashour is a Lecturer in Politics in the Institute of Arab and Islamic Studies, University of Exeter. He has a PhD in International Relations from McGill University in Canada.

Omar Ashour is a Lecturer in Politics in the Institute of Arab and Islamic Studies, University of Exeter. He has a PhD in International Relations from McGill University in Canada.

"The De-Radicalization of Jihadists is an outstanding piece of work...Ashour manages to provide a highly detailed, very well-presented analysis of how and why several of the most important armed Islamist movements over the last 70 years have successfully sought to fundamentally alter their ideology, behaviour and structure and why this has been unattainable for others." - Chris Macmillan, International Affairs

"What Omar Ashour has produced is truly a pioneering work in an area of growing sociopolitical and geopolitical significance." - Saad Eddine Ibrahim, Harvard and American University in Cairo

"The book offers a detailed and well-presented analysis of deradicalisation processes involving several of the most important Islamist insurgent/terrorist movements today. The manuscript presents very important new insight into how and under which circumstances militant Islamist organizations may deradicalise and renounce political violence. Given the obvious policy-relevance of the analysis as well as its detailed and well-researched presentation of Islamist militancy in Egypt and Algeria, this manuscript will also be very useful in professional training for security /counterterrorism professionals as well as in graduate courses in Middle Eastern studies and graduate courses on international terrorism. The book is impressive." - Brynjar Lia, Norwegian Defence Research Establishment