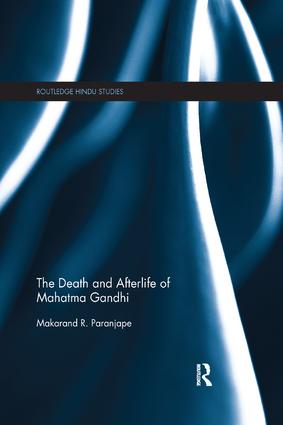 The Death and Afterlife of Mahatma Gandhi

Who is responsible for the Mahatma’s death? Just one single, but determined, fanatic, the whole ideology of Hindu nationalism, the ruling Congress-led government whichfailed to protect him, or a vast majority of Indians and their descendants who considered Gandhi irrelevant? Such questions mean that Gandhi, even after his tragic and brutal death, continues to haunt India – perhaps more effectively in his afterlife than when he was alive.

The Death and Afterlife of Mahatma Gandhi is a groundbreaking and profound analysis of the assassination of the ‘father of the nation’ and its after-effects. Paranjape argues that such a catastrophic event during the very birth pangs of a new nation placed a huge burden of Oedipal guilt on Indians, and that this is the reason for the massive repression of the murder in India’s political psyche. The enduring influence of Gandhi is analysed, including his spectral presence in Indian cinema. The book culminates in Paranjape’s reading of Gandhi’s last six months in Delhi, where, from the very edge of the grave, he wrought what was perhaps his greatest miracle, the saving of Delhi and thus of India itself from internecine bloodshed.

This evocative and moving meditation into the meaning of the Mahatma’s death will be relevant to scholars of Indian political and cultural history, as well as those with an interest in Gandhi and contemporary India

"A remarkable work of research and analysis. …  it is obvious that you have come up with a most valuable text."

Rajmohan Gandhi, Professor of Political Science at the University of Illinois at Urbana-Champaign, former member of the Indian Parliament, and a grandson of the Mahatma.

"…New, creative, and daring interpretations…. little patience with the Gandhi hagiography and with devotees and critics simply recycling the same tired interpretations for decades. … the lively engaging writing style and the challenging creative interpretations are definite strengths."

"…fascinating and thought-provoking sections getting at the patricide, Oedipus Complex…your central interpretation is daring and challenging…."

"You have made your readers understand Gandhi’s life in a new way--by understanding the meaning and the manner of his death. This is an original approach to Gandhi and you make a most welcome addition to the Gandhi literature."

Birth Traumas of the Nation

I: Who Killed Gandhi?

VI: The Unbearability of Patricide

XI: The Modernity of Patricide

XIII: Gandhism vs. Gandhigiri: The Life and Afterlife of the Mahatma

XIV: Beyond the Monument: Remembering the Mahatma

I: Arrival in Delhi

II: ‘Do or Die’: An Old Formula in the Capital of New India

V: Gandhi at an RSS Rally

VII: Ahimsa: ‘Softer than a flower and harder than a stone?’

IX: The Art of Dying

Makarand R. Paranjape is Professor of English at Jawaharlal Nehru University, New Delhi. Among his latest monographs is Making India: Colonialism, National Culture, and the Afterlife of Indian English Authority (2012) and Altered Destinations: Self, Society, and Nation in India (2010). His previous work on Gandhi includes Decolonization and Development: Hind Svaraj Revisioned (1993).