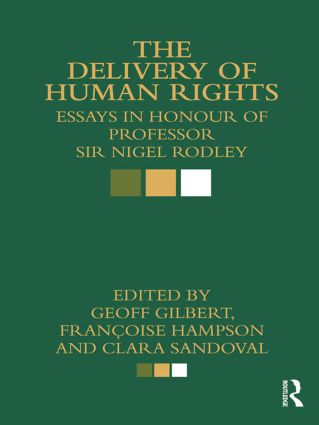 The Delivery of Human Rights

The Delivery of Human Rights reflects on two overlapping issues in international human rights law: how can existing norms be better implemented and effected, and how can other branches of international law or other international actors be used so as to provide an improved delivery of those norms. Rather than simply looking at the content of the rights, this book will also explore how the framers’ intention that individuals benefit from the norms can be achieved.

The book is written and published in honour of Professor Sir Nigel Rodley KBE. It celebrates his career as an academic and practitioner in the area of human rights. Professor Rodley acted as the UN Special Rapporteur on Torture from 1993 to 2001 and is currently a member of the UN Human Rights Committee. He is also a member of the International Commission of Jurists. Since 2001 he has been a Member of the UN Human Rights Committee, established under the International Covenant on Civil and Political Rights. In 1998 he was knighted in the Queen's New Year's Honours list for services to Human Rights and International Law and in 2000 he received an honorary LLD from Dalhousie University. He is Professor and Chair of the Human Rights Centre, University of Essex, having taught there since 1990.

The contributors to this volume are notable experts in the area of human rights law and include Paul Hunt, Malcolm Evans, Michael O’Flaherty and David Weissbrodt. The book addresses such topics as the Role of Special Rapporteurs, how can the absolute prohibition of torture be properly implemented, Responsibility to Protect, non-state actors, including businesses, and human rights.

Geoff Gilbert, Françoise Hampson and Clara Sandoval are all members of the School of Law at the University of Essex, UK.